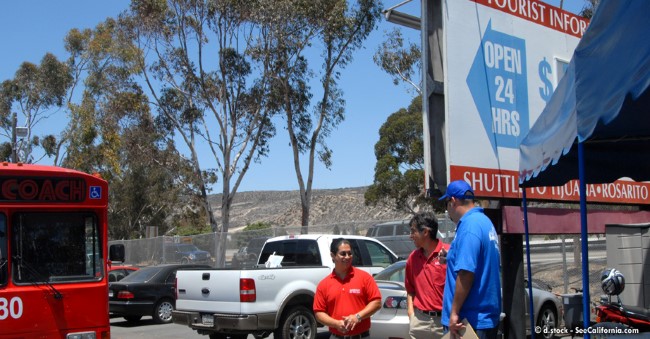 Get on the bus, Gus, and head across the border to Mexico at San Ysidro, part of the City of San Diego, Calif.

For visitors to California's top beach destination, San Diego, you may pass through San Ysidro and most likely will if you visit Mexico. The busiest border crossing in the world sees millions of people annually going through the gates from San Ysidro into Mexico. San Ysidro has huge parking lots where visitors to Baja Mexico can park their cars and walk across the border or take a bus that you never have to drive during day trips.

Annexed by the city of San Diego in 1957, what seems like its very own city and place is really part of San Diego, thus the revenue from border businesses is captured through licensing and taxes.

Largely Hispanic and bilingual, the people who work and live in San Ysidro have their own business association that acts similar to a chamber of commerce to promote the activities of a community located approx. 15 miles from downtown San Diego and directly on the border with Mexico (sanysidrochamber.org)

Interstate 5 crosses into Mexico at San Ysidro, with over 17 million vehicles and 50 million people making the cross-the-border journey at San Ysidro Port of Entry during an average year. So massive is the daily route of Mexicans working in California and Californians heading to Mexico that many get up at 2:30 a.m. to get to work for jobs that start around 6 a.m. The back-up of traffic supports a variety of radio stations that commuters listen to for minute by minute reports on the length of average crossing time, which can be as long as three hours.

San Diego Trolley runs from downtown San Diego to the border crossing for tourists in the city near the convention center and Gaslamp.