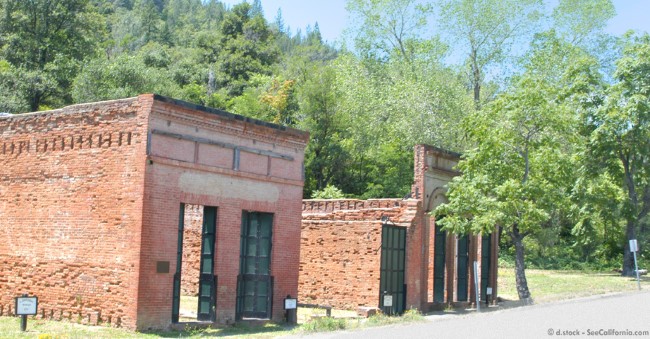 If you drive by it fast on Highway 299, you might blink and miss the amazing ghost town. Even when the museum and courthouse building are closed after hours, it is worth stopping your car to look at the buildings and try to peak in the windows. Just standing among the remains of a once lively gold rush town evokes emotion and a sense of how life must have been 150 years ago. Shasta City, the lusty Queen City of California's northern mining district, once stood on the site.

Brick Ruins Shasta State Historic Park - The red brick buildings are standing remnants of a once thriving gold rush shopping district. Hotels, bookstores, markets and stables occupied the mile long stretch of hollowed buildings. The boomtown prospered from 1850-1890 but when the gold played out, many of the mining camps were deserted, and the miners moved to cities such as Sacramento and San Francisco, seeking work.

The County Courthouse is restored to its 1861 appearance, the year when it was converted from commercial uses to become the Shasta County Courthouse. Today the building is filled with historical exhibits, and an unparalleled collection of historic California artwork that make it the central figure of Shasta State Historic Park.

These ruins and some of the nearby roads, cottages, and cemeteries are all silent but eloquent vestiges of the intense activity that was centered here during the California gold rush. Iron shutters still swing on massive, old, iron hinges before the doors and windows of grass-filled, roofless buildings that once were crowded with merchandise, and alive with the human sounds of business, trade, and social endeavor.