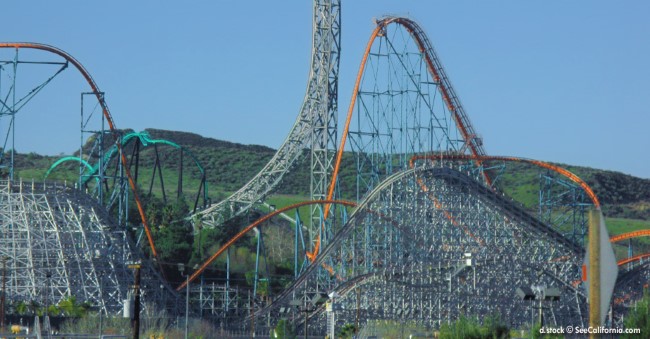 Valencia is a community often recognized with Six Flags Magic Mountain. It is one of several communities that joined forces with Saugus, Newhall, and Canyon Country and incorporated under the name of Santa Clarita in 1987. Set in the Santa Clarita Valley, after rains the hills can be lush green, but most the year they are tanned to golden from the dry grasses.

Valencia is located off Interstate 5 and has grown, thanks to the millions of travelers that pass through the area by the millions. Built as a planned community, residents pay special assessments to fund the landscaping and other amenities that are unique. Paseos with decorative shrubs and plants accent the pride of ownership that residents embrace, which helps to explain why it has been called one of the Top 100 Places to Live in the U.S. by Money publication. With close to 50,000 residents, the

History of Valencia: Newhall Land and Farming Company began methodically developing Valencia in the 1960s and creating residential village concepts in neighborhoods such as

and continues to the present day. Valencia is notable for its landscaped boulevards connecting a mix of apartment buildings, single-family detached homes, shopping centers, office parks and industrial warehouses. Major schools in Valencia include California Institute of the Arts, College of the Canyons, The Master's College and Valencia High School. Valencia's residential areas are separated into villages, each with its own lifestyle (see List of Valencia, California's Residential Villages). Almost all of Valencia's villages are close to schools, shopping, etc. In many of the villages, homeowner's associations oversee the quality and upkeep of housing developments ranging in size from a few dozen homes to over a thousand. Many villages also have a Neighborhood Watch program in force. Valencia also has an extensive system of paved pathways with grade separations over and under the boulevards. The pathways are called paseos. These paseos connect the entire community together making it possible to travel around Valencia without having to cross streets at grade. The paseo network is connected to the Santa Clara River Trail which runs east along the Santa Clara River to Canyon Country. Landowners in the Valencia area pay special taxes to maintain landscaping and the paseo system. Recently, Valencia has emphasized its history as a planned community with the catchphrase, "Built as promised." It has even gone as far as to unofficially brand itself as "Awesometown," using the tagline "Just Another Day in...Awesometown" on the website.