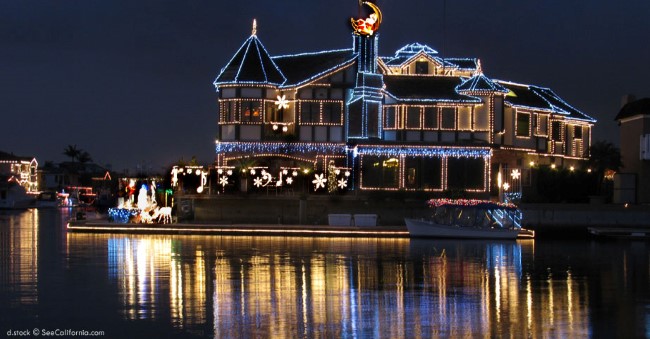 The Huntington Harbour Christmas Boat Parade is one element of several events celebrating the best place to see Christmas and holiday lights in Huntington Beach. Orchestrated by volunteers of the non-profit Huntington Harbour Philharmonic, which seeks to bring music education into the public school system, the two-night parade is held one weekend in December. It takes place before the Cruise of Lights tourist cruise attraction, which happens before Christmas (December 17-23, 2019).

Proceeds past Portofino where visibility may occur at Park Circle Drive and Sunset Aquatic at approx. 6 p.m., turning around near Simple Green and the fuel dock where limited public viewing may occur at Peter's Landing.

Turns around and passes Gilbert Island with streets Maiden Circle and Peale Lane may offer views around 6:25 p.m. onward.

Travels down channel next to Gilbert Island, Coral Cay (private gated) and visibility may be possible along Gilbert Drive before 7 p.m.

Heads down the channel passing Coral Cay and Davenport Island. Best visibility is Bolero Land on Davenport with expected time for visibility between 7:25 and 7:55 p.m. Turn around in Weatherly Bay begins at approx. 7:35 p.m. There's a 2nd judging area.

At 8 p.m. the parade heads down the channel next to Davenport Island with Baruna Lane the nearest street for visibility. The parade turns around at Davenport Drive bridge.

By 8:15 p.m. the parade should be circling around next to Tennis Estates and heading back down the channel, passing the starting point, turning up the channel between Humboldt Island and Trinidad Island for a turn-around at Seagate at approx. 8:50 p.m. The parade ends shortly afterward.


For more than 50 years and holiday seasons the annual Huntington Harbour Boat Parade has delighted guests who can enjoy watching the festive event on bridges and along the waterways of the five manmade islands.

The boat parade has a minor downfall--viewing areas are limited to tourists from outside the harbor area and parking is extremely limited. If you are lucky enough to have friends living in Huntington Harbour or have a watercraft in which you can watch the event, all the better. Otherwise, park yourself at some bridge (there are several) and get a glimpse of the parade as it passes by.