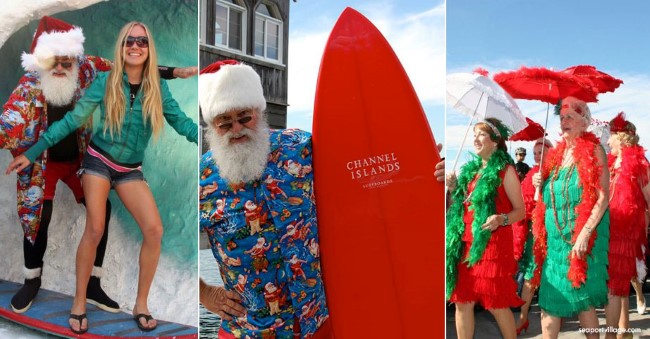 Each year after Thanksgiving Santa Claus arrives in San Diego by way of surfing the high seas. He comes in a his board shorts, a festival shirt and the Santa Hat, but he might be barefoot or wearing flip flops.

Other holiday festivities in San Diego include the Christmas Boat Parade.

Seaport Village sponsors the Surfing Santa event with opportunities to pose with Santa next to a wave and standing on a surfboard or some other similar setup. It's not a wipeout. It's loads of fun!

The event includes Santa's appearance (often by watercraft as the harbor isn't known for its waves,) and maybe some magic...a whimsical parade, some stiltwalkers, magicians...you never know who and what's planned. But you can always count on it being fun.

Surfin' Santa's arrival celebration will include: Surfin' Santa at Seaport Village Kids and adults will greet San Diego's board short-wearing Santa for a lively parade down the boardwalk after he arrives at 1 p.m. via Jet pack provided by Jet Pack America. Santa will be available for photos on his surfboard all afternoon.

Ornament Making your child can take home to hang on your tree at courtesy Birch Aquarium!

Holiday shopping at 50 shops and eateries.