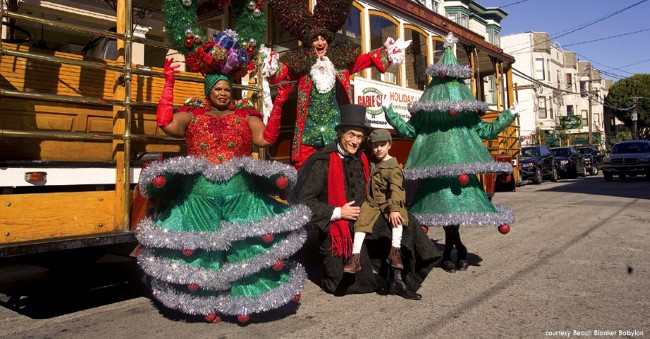 The Golden Girls: The Christmas Episodes

War Memorial Opera House
The first ballet company to bring the Nutcracker tradition to America, San Francisco Ballet's awe-inspiring production is like no other. Set in San Francisco during the 1915 World's Fair, Clara's dreamlike journey is an ode to the City's historical grandeur - all amidst colorful, larger than life scenery, more than 200 dazzling costumed characters and Tchaikovsky's beautiful score performed live by the world-class San Francisco Ballet Orchestra.

A Chanticleer Christmas
chanticleer.org
prices vary
This much beloved Bay Area tradition brings the power and mystery, warmth and intimacy of the season to capacity audiences in beautifully decorated churches, cathedrals and missions.

Jewish comedy on Christmas in a Chinese restaurant now serves up hilarious entertainment that's going strong after 20+ years. What started out as a joke by local standup comic, Lisa Geduldig, has become an institution in San Francisco, giving more than 2000 comedy aficionados and those escaping Christmas-mania an annual reprieve from I'm Dreaming of a White Christmas.