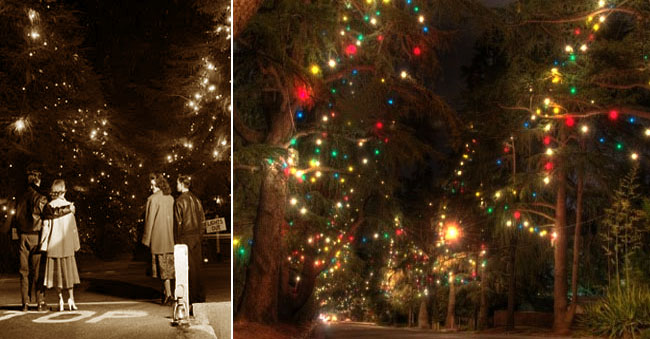 No Traditional Lighting Ceremony in 2020

Approx. 135 Deodar Cedar trees create the oldest large-scale outdoor Christmas display in the world! Christmas Tree Lane is on the National Register of Historic Places and is also California State Landmark No. 990. It has been designated as a landmark in its singularly significant social convergence of two commodities: the outdoor electric light and the automobile. Christmas Tree Lane is also recognized as the only botanical landmark on the State Registry.

The tree lighting is a fun-filled day that includes an Arts and Crafts Festival at Altadena Library parking lot with vendors selling holiday gift items. Food vendors and food trucks are on hand selling budget gourmet. Christmas Tree Lane will continue to provide complimentary spiced hot cider, coffee and cocoa. Parking is limited on the streets surrounding the Altadena Library, 600 E. Mendocino St. So come early. Santa Rosa Ave., at the library, will be closed to vehicles after 4 p.m. Mariposa St. to Woodbury Rd., will be open to pedestrians to walk under the umbrella of twinkling lights and closed to vehicle traffic after 7 p.m. and reopen at 8 p.m. John Muir Alumni Drum Corp entertains the crowd.

Before the big Tree Lane lights up for the holidays (usually the 2nd Saturday in December to New Year from dark to midnight,) volunteers can help string lights on the trees on Christmas Tree Lane, a beautiful drive filled with Deodar trees. The stringing of the lights begins in October each year. Community volunteers string lights along the length of these trees for the thousands of people to drive to and look at, celebrating an old-fashioned Christmas.

When we wrote in 2016 that over 70 million trees in California forests died mostly due to drought, just days later the number grew to over 100 million, then 102 million. The drought also threatens a wonderful 96-year tradition at the National Historic Christmas Tree Lane in Altadena, where a tree lighting ceremony takes place. With lower water tables from five years of drought and less watering in parks and medians, Los Angeles County Department of Public Works Tree Maintenance Department issued a warning in the summer 2016. Unless they received water quickly, 17% of the famous trees faced imminent death. Imported from the western Himalayas in 1885, these deodar cedars have been decorated with holiday lights each December for nearly 100 years, delighting thousands of people who come from around the world to Los Angeles County. A new county irrigation system installed by local volunteers includes 78 dry wells, each about 4-feet deep, feeding 750 gallons of water per tree. It's enough water to give the trees a fighting chance.

Deodar pines line a approx. mile-long street where the trees have outlived their age expectancy of over 100 years (must be that Southern California sunshine) to the delight of all who make the drive each year --November through December.

If you think old-fashioned tree lighting is out of style, just drive to Altadena each Christmas. The traffic queues up and the people come from far & wide to drive along the lane and see the beautiful sight. Thousands of cars drive by to experience a tradition that has been in existence for well over 80 years. There's usually an annual lighting ceremony at Altadena Library grounds with speeches, children singing and then the tree lighting from 5 to 7 p.m. The date is sometimes the 2nd Saturday in December, though the actual ceremony date is hard to come by.

Christmas Tree Lane is one of the oldest Christmas lighting spectacles in Southern California dating back to 1920. Local resident and Pasadena businessman Frederick C. Nash enlisted Pasadena Kiwanis Club to light a quarter- mile section of the roadway, thinking it would look nice. It didn't just look great, it was a huge success!

The fast growing Deodars had been planted in 1885 by the founders of Altadena, the Woodbury Family. John Woodbury saw the trees on a trip through Italy, and had his ranch hands plant more than 100 along both sides of an avenue running uphill from Woodbury Road. At the time of transplant, the trees were 2-feet tall. The boulevard became known as Avenue of the Deodars.

In 1927 Altadena Kiwanis Club began the custom of taking
less fortunate children for rides along what they billed as "Christmas Tree Street."