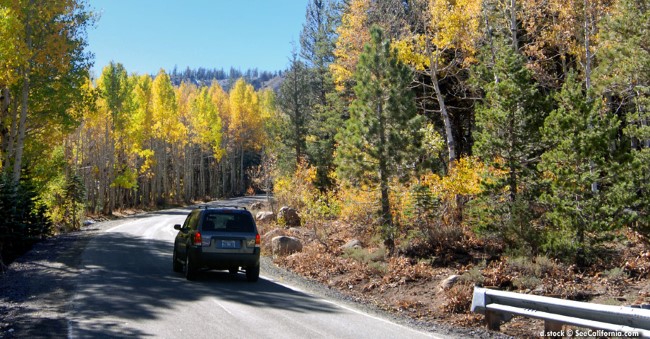 Alpine County California, the least populated of 58 counties in California, is located south of Lake Tahoe and north of Yosemite along the crest of the central Sierra Nevada. The California Alps as Alpine County is fondly referred to, contains 700 square miles of the Sierra Nevada mountain range. Alpine County offers all year alpine recreation, two destination ski resorts, and a variety of lodging and dining facilities.

During the winter months, the community is only accessible from the north via Highway 88 & 89, as both Monitor Pass* and Ebbett's Pass close for the season due to heavy snow.

Attractions: The Alpine County Historical Complex is open seasonally, from Memorial Day weekend through the end of October. Museum staff is available year-round on a part-time basis, and can be contacted by mail or by leaving a message on the museum answering machine. Staff can provide answers to many questions relating to the history of Alpine County, including genealogy research questions.

The Historical Complex houses exhibits that highlight Alpine County history. Features of the complex include:

The historic and restored silver ore stamp mill operates on special dates.
Old Webster School - a one-room school, which was built in 1882, abandoned as a school in 1929, and restored during the 1960's
Museum - contains displays of an old country store, a blacksmith shop, Washoe Indian basketry, watch maker's desk, doctor's black bag with tools, supplies and medicines, mining exhibit, pioneer family exhibit, toys and dolls, clothing, photographs, paintings, and relics from prehistoric sites. "Alpine Mercantile", the museum store, offers historical society members a 10% discount on all merchandise.
Old Log Jail - a unique structure made of hewn logs of various dimensions, containing two hand-riveted iron cells. The cells were originally located at Silver Mountain City and were moved to Markleeville in 1875.

Death Ride (deathride.com) is a bicycle competition in the stunning California Alps, with a super challenging course that covers five mountain passes-- Monitor Pass, both sides of Ebbetts Pass, and the final climb up the east side of Carson Pass. Cyclists will finish at Turtle Rock Park, located two miles north of Markleeville, CA. It takes place in July each year.

About Alpine County: El Dorado, Amador, Calaveras, Tuolumne, and Mono counties and Douglas County, Nevada border Alpine County. The main routes in Alpine County are state highways 88, 89, and 4. Markleeville, the County seat, is home to many of the county's offices. Since Alpine County has no incorporated cities, most public services are provided by county departments and agencies. Created March 16, 1864, Alpine County derived its name from the English word alpine meaning "of, pertaining to, or connected with, the Alps." Its geographical position, lying as it does on the crest of the Sierra Nevada mountains, makes it particularly an alpine county.

Alpine County includes the Alpine County Chamber of Commerce that declares, "Two people per square mile and you." 96% of the county's land is in public ownership with few opportunities for land development and growth. A county with no traffic light, high school, bank, theater, dentist or supermarket still manages to enjoy a healthy, happy lifestyle through tourism. Fishing, camping, hiking, rafting, skiing and winter snow sports are some of the attractions for people who seek to get away from crowded L.A. and San Francisco. The first inhabitants were Washo, who occupied the mountains and valleys of western Nevada and eastern California. They excelled in basketry and spent their summers around the shores of Lake Tahoe, while a southern band of the tribe, the Hung Lel Ti, lived around the Diamond Valley area of Alpine County. alpinecounty.com

If you think the residents of Alpine County lack the modern conveniences and cosmopolitan lifestyle others enjoy, you'll be surprised. Located 31 miles from South Lake Tahoe, there's casino gambling at Nevada Stateline, live stage shows with dance revues, boutique shopping, ski gondola rides and just about anything you heart desires. Alpine County maintains its cherished natural environment while experiencing the best cultural, food and entertainment activities a short drive away.

NO. 240 MARKLEE'S CABIN SITE - Jacob J. Marklee recorded his land claim of 160 acres on June 23, 1862, in Douglas County, Nevada, but after the boundary survey his claim was in California. During the rush to the Comstock Lode, the town of Markleeville was built upon Marklee's land - the Alpine County Courthouse now occupies the site of his cabin.
Address: County Courthouse, Markleeville

NO. 315 KIT CARSON MARKER - On this spot, the summit of the Kit Carson Pass, stood the Kit Carson Tree on which the famous scout Kit Carson inscribed his name in 1844 when he guided the then Captain John C. Frémont, head of a government exploring expedition, over the Sierra Nevada. The original inscription was cut from the tree in 1888 and is now in Sutter's Fort, Sacramento.
Address: On State Hwy 88 (P.M. 5.2), 14.5 mi W of Woodfords

NO. 318 EBBETTS PASS ROUTE - The Emigrant Trail through Ebbetts Pass, discovered by and named after 'Major' John Ebbetts, was opened up in the early 1850s, but no wagon road went that way until 1864, when a toll road, under the name of Carson Valley and Big Tree Road, was completed to help open up the Comstock Lode in Nevada.
Address: Ebbetts Pass on Hwy 4 (P.M. 18.5), 18 mi SW of Markleeville

NO. 378 MEMORIAL TO PIONEER ODD FELLOWS - On some large rocks near Carson Pass, a group of pioneers inscribed their names and the emblem of the Independent Order of Odd Fellows in 1849.
Address: On State Hwy 88 (P.M. 5.3), 14.4 mi W of Woodfords

NO. 661 OLD EMIGRANT ROAD - Here the Old Emigrant Road of 1848 swung down across the meadow now covered by Caples Lake (Twin Lakes) and climbed along the ridge at the right to the gap at the head of the valley. From this summit (9,460 feet) it descended to Placerville. This rough and circuitous section became obsolete in 1863 when a better route was blasted out of the face of the cliff at Carson Spur.
Address: Lake Caples, on State Hwy 88 (P.M. 2.4), 173 mi W of Woodfords

NO. 805 PONY EXPRESS REMOUNT STATION AT WOODFORDS - Woodfords became a remount station of the Pony Express on April 4, 1860, when Warren Upson scaled the mountains in a blinding snowstorm and made his way down the eastern slope of the Sierra on his way to Carson City. Five weeks later the Pony Express was rerouted by way of Echo Summit and Luther Pass.
Address: On Hwy 89, 0.1 mi N of intersection of State Hwy 4 and Old Pony Express Rd, Woodfords