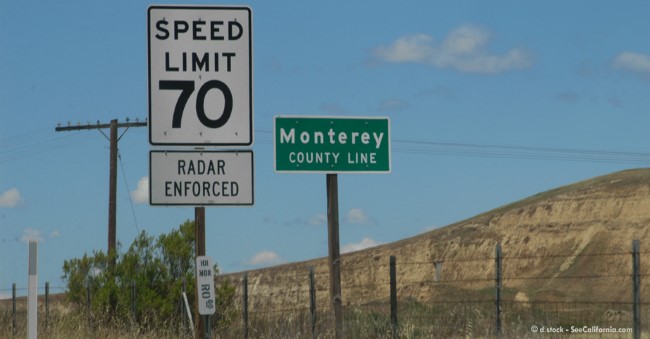 Monterey County on the California Central Coast isn't merely one of the state's top romance and golf destinations. It also is contains Salinas Valley considered the salad bowl of the nation. As you drive along Highway 101 that spans the county from north to south, you'll notice miles of agricultural fields, and a range of mountains to the west that flank the valley. These mountains are called the Santa Lucia Mountains or Santa Lucia Range and they run from Monterey southeast for 105 miles to San Luis Obispo. The highest summit is Junipero Serra Peak at 5,853 ft. in Monterey County. It is part of the Pacific Coast Ranges.

To the west of Monterey County is the Pacific Ocean, the Monterey Bay, and Monterey National Marine Sanctuary. Other counties that surround Monterey include Santa Cruz, San Benito, Fresno, Kings, Kern, and San Luis Obispo Counties.

Monterey County is a county located on the Pacific coast of the U.S. state of California, its northwestern section forming the southern half of Monterey Bay. The northern half of the bay is in Santa Cruz County. As of 2000, the population was 401,762. The county seat is Salinas. Monterey County is a member of the regional governmental agency, Association of Monterey Bay Area Governments. The coastline, including Big Sur, State Route 1, and the 17 Mile Drive on the Monterey Peninsula has made the county world famous. The city of Monterey was the capital of California under Spanish and Mexican rule. The economy is primarily based upon tourism in the coastal regions, and agriculture in the Salinas River valley. Most of the county's people live near the northern coast and Salinas valley, while the southern coast and inland mountain regions are almost devoid of human habitation.

Monterey County was created in 1850 as one of California's original counties as it became a state the very same year. Parts of the county were given parceled to San Benito County in 1874.

The county was named by Sebastián Vizcaíno in 1602 in honor of the Count of Monterrey. The county is comprised of 3,771 square miles. Major crops include lettuces and other green vegetables, produce and wine grapes. The Monterey Bay once was a popular sardine canning region. Its history can be experienced in a hands-on Steinbeck Museum in Salinas--well worth a visit!