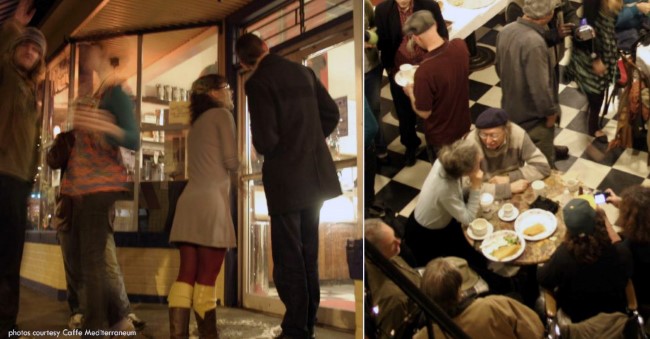 Is Berkeley the epi-center of invention? If it's true that the Caffe Latte was invented here, then we say it is the Mother of Invention.

With the likes of Frank Zappa possibly having visited this eclectic college-town cafe in the heart of the city, Caffe Mediterraneum has served musicians, thinkers, creators, students, professors and every day people since the 1950s.

Claimed to have created the caffe latte around 1957, th cozy storefront that sells beverages and food was originally known as Caffe Med kiosk in a bookstore at Haste and Telegraph in Berkeley.

Caffe latte was reportedly invented (so the long-told story goes) after customers complained that import coffee drink, espresso, was too bitter. Caffe Med added steamed milk to make it smooth and hot. Then they turned their customized, repeat request into an officially named beverage and added it to the menu board. Though the ownership has changed hands since the original owners introduced imported Italian coffee blends, beans and machines, Caffe Med hasn't lost touch with the famous drink that probably would have made into the mainstream, anyway.