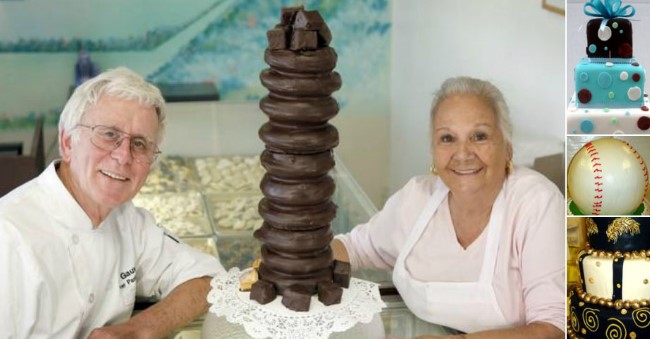 For more than 60 years, Paul Gauweiler has brought so much wonder and joy to people around the world, especially during the holidays, that some call him "the Santa of Bakers."

He has baked cakes for U.S. military troops in Afghanistan, provided "wow" pastries for "American Idol," and regularly prepares the mouth-watering desserts for Disneyland's Club 33.

But what "Santa Paul" is best known for internationally, is his acclaimed "Baumkuchens" (also known as tree cakes). From his longtime Huntington Beach, CA bakery, The Cake Box, the impish 77-year-old, creates the special tree cakes for weddings, state dinners, anniversaries, Disneyland and even ships them to customers in Japan, Canada, South America and many other places on the globe.

Nearly 41 years ago, he was pastry chef at Disneyland and happened to see a newspaper ad on a bathroom floor that said, "Bakery for Sale." He ended up purchasing the advertised business at 6054 Warner Ave. in Warner Dale Square (Springdale and Warner).

He makes his legendary Baumkuchens on a marvelous, old device--one of only 3 in the United States.

In the 1950s, Paul baked his first tree cake as an apprentice in his hometown of Hannover, Germany. He learned from a Master Pastry Chef at the Opera Pastry House, near the Opera House. "I have a customer from my hometown, who used to come with his mother to that same shop and purchase Baumkuchens when I was working there," Paul said.

At 24, he earned a Master of Pastries Degree or "Konditormeister" in Hannover. Paul practiced his art all over the world, including Paris (where he worked in a hotel and married another great chef, Irene) and Lake Tahoe (head Pastry Chef at Harvey's Resort).

Each of his tree cakes are painstakingly created layer by layer on a rotating spit in front of dozens of gas-fired flames that brown each layer. They have at least 8 layers and as many as 20, created by ladling apricot and other batters onto the turning delicacy.

Forty inches is the tallest Baumkuchen. "You can feed 140 people on a thin one that size," explained the friendly man. "You usually can feed 10 people per pound of cake. With a full mix, you can feed 210."

Paul's amazing artistry has attracted feature stories in New Yorker Magazine, The Los Angeles Times and other publications of note.

KTLA-TV News Anchor Chris Burrous, who did a segment on Paul in his popular "Burrous' Bites," loved the different tasting layers of tree cake and has become a repeat customer.

People from all over the world hear about him from the media and friends, who have tasted his delicious desserts. "It reminds me of home," said Hilda Schneider of Hamburg, who's visiting friends in Orange County. "I've never found any Baumkuchens like this anywhere in the United States. Paul really is a master!"

Thank goodness Paul's mom never told him: "If you can't stand the heat, stay out of the kitchen." Santa Paul loves the heat and because of it, he has been using his original recipe and honed skills to bring so much joy throughout the year to everyone lucky enough to taste his tree cakes or any of his dishes. He's truly a world treasure!