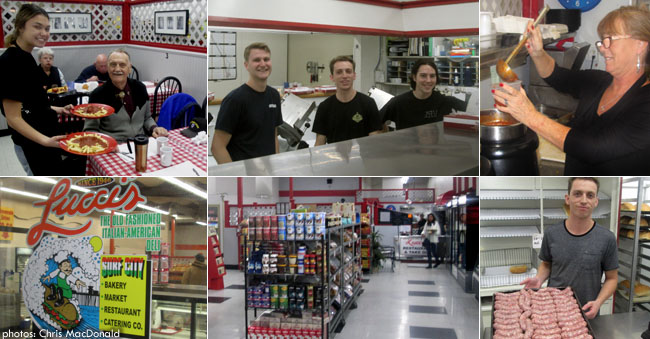 For 73 years, Lucci's has always been about family. Family members still pitch in at the old fashioned Italian-American Deli-Restaurant-Bakery-Market and Catering business.

The popular family-owned and operated enterprise is known as much for its family atmosphere as its delicious food and affordable prices. Many customers have been enjoying it for decades.

"We come for the people. Everyone—from the servers to the cooks to the clientele—are so friendly and the food's so good!" explained Prudence Jantz, who, with her husband, Peter, have been dining there for many years.

The feeling is mutual with the servers, like Rachel, Samantha, Alaina, Cole, Bree and Mindy. "I appreciate the sincere relationships we develop with the nice customers and getting to work for a family-operated restaurant, rather than a chain," said Mindy, who has served customers for 10 years. "It's so much fun coming to work and seeing many of the same people. We become good friends!"

In 1946, Lena and Carl Lucci (who operated a grocery store in Pittsburgh) began Lucci's in Gardena. For 40 years, the Lucci family members made it prosper. In 1971, Lucci's expanded by opening a deli (in part of a former Huntington Beach Albertson's Store). It was operated by their son Bill Refice, Sr. and his wife, Jean. Today, it's run by their sons, Bill and Rick Refice and family.

During the recent Holiday Season, Rick's wife, Joyce, worked energetically with her crew of caterers, bakers and chefs to provide a variety of food for many parties all over the Southland. Rick and Joyce's son, Taylor, works regularly making Italian Sausage Links, Garlic Bread and much more. He and his team of deli workers, including Eric, Ross, Chris, Cole, Johnny and others, delight customers with their efficiency and friendliness.

For many of us, Lucci's is the "go-to" place for nearly everything that involves eating. Surfing Champion David Nuuhiwa, a native of Hawaii, said he likes their Linguini with Clams. "I really like their pineapple upside down cake—its old fashioned and delicious," said Brian Cizek, a customer for decades. "It's perfect for families and for breakfast on weekends," said HB City Councilman Patrick Brenden. "The food's so authentic."

Many of their items are imported from Italy, including certain oils, sauces and pasta. You can even get a variety of rare soft drinks and wines from all over. They also are known for their home-cooked cookies, cakes, pies and other things created in the kitchen. Pizza kits are available to take and bake at home.

Local hospitals, churches, schools and companies order from them. Even the HB City Council sometimes eats Lucci's food at City Hall before meetings. Come and visit Lucci's and you'll sense the friendliness of Ben, Sean, Grace, Garrett, Romano, Ayden, Joan, Jake and the others, who help continue the excellent tradition of Lucci's.