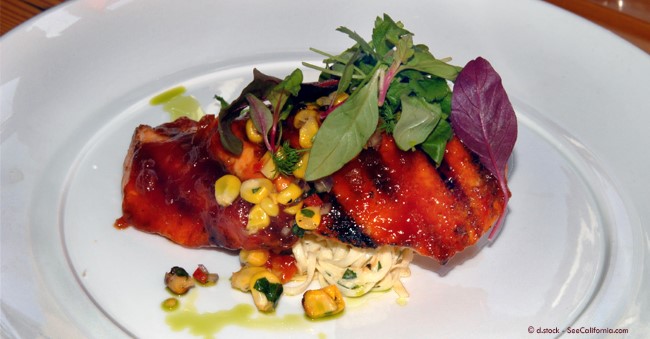 Laguna Beach, California--Sapphire Laguna is located on Coast Highway in the heart of Laguna Beach's dining and shopping district. You can't miss it, thanks to the statue of a famed person who was called "The Greeter". Located in a complex formerly part the Pottery Shack, the small complex includes a chocolates shop, deli with fine cheeses and breads, art and glass studio established by one of Laguna Beach's longest working glass blowers who trained many artists featured in his shop, and a large statue of the The Greeter. In 2007 the restaurant and lounge, Sapphire Laguna, with its adjunct gourmet specialty shop, Sapphire Pantry opened.

Prior to opening Sapphire Laguna and Sapphire Pantry, Ghahreman devoted five years of outstanding service as executive chef of the four restaurants at AAA Five Diamond St. Regis Monarch Beach Resort & Spa, Dana Point, California.  His accomplishments are numerous and include, leading a nine chef winning culinary team in 1997 and 1998 in the Malaysian National Culinary Competition; heading an eight chef team at the United Nations Food and Art Festival for the Malaysian Tourism Board in 1997.

He's prepared menus for 30 kings, presidents and heads of state and has appeared on many television shows including The Food Network's "In Food Today"; "Good Morning Singapore", BBC's "Good Morning London" and many more. He also has a mixology certificate from the American Bartending School. Ghahreman is an actively involved with local school efforts to educate children about healthy and sustainable foods, and he grows a garden at his home.

The interior decor of Sapphire Laguna exudes casual elegance (it's the beach). You probably wouldn't come in with your swimwear on, but you can dress casual or dress up a bit more.

Design elements includes pleasing art, designer lighting, and quality furniture you'd expect to see in a home. Sapphire Laguna is as comfortable as being at home, and it's comfort adds to the many reasons people come and dine, filling the small bar & restaurant often,  and especially for dinner.

Lunch menu is a value compared to dinner for those who want to enjoy gourmet and stay within budget. For around $15-20/person, you can have a delicious lunch and though the faire is not served in huge portions like you would see at The Cheesecake Factory, the flavors and unique dishes are addictive, utilizing many sauces with complex flavors and spices you can't always unravel.  And the menu at Sapphire Laguna has included a Cheesecake on the menu, though we've not tried it, though the other dessert sampling was superb!

A favorite for lunch that gives a good sampling and introduction to the cuisine is the Lunch Box, a Bento Box-shaped offering with most food groups highlighted in four samples.

The menus changes so we're going to refrain from getting into detail but suffice to say, SeeCalifornia.com recommends Sapphire Laguna. The food is fantastic!

Located across the street from Cress Street Beach, one of 22 beaches in Laguna Beach,  be sure to wander across the stoplight and descend the stairs to the coves of the neighborhood beaches that are intimate, though sometimes unavailable during high tide.

La Casa del Camino, an historic hotel near Cress Street Beach and Sapphire Laguna, is elegant and worth a stay. You'll pay more for one of the designer rooms from top decorators but it's worth it.  On-site award wining restaurant features gourmet French cuisine served nightly.