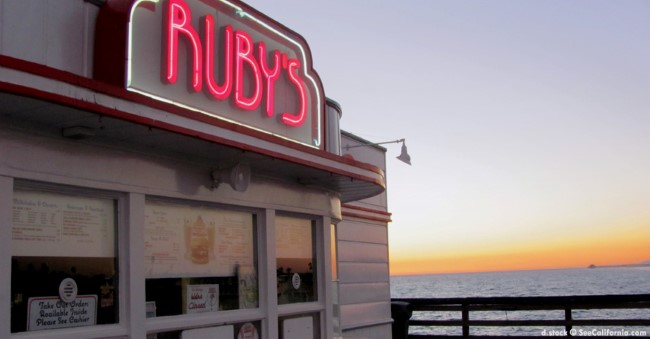 Newport Beach, Calif.--The original Ruby's 50's style diner was launched on Dec. 7, 1982 on the Balboa Pier in Newport Beach. Specializing in delicious, affordable faire in and around tourist destinations, you will find Ruby's at numerous piers in California.

This original location launched an empire popular for its consistency and American favorites menu of hamburgers, sandwiches, salads, soups, French Fries, dinner plates (all at prices that don't generally exceed $15) and of sundaes, splits, malts & shakes.

There are two piers in Newport Beach and only one features Ruby's. You have to drive along Newport or Balboa Blvd. till you reach Main Street on the Balboa Peninsula. Beach parking lots with metered parking are located right at the base of the pier where you will see Ruby's lit with the big red letter sign.

Other locations include over 40 diners in cities ranging from Kahului, Maui, Hawaii to Houston -TX, Redmond-WA, and Glen Mills in PA.