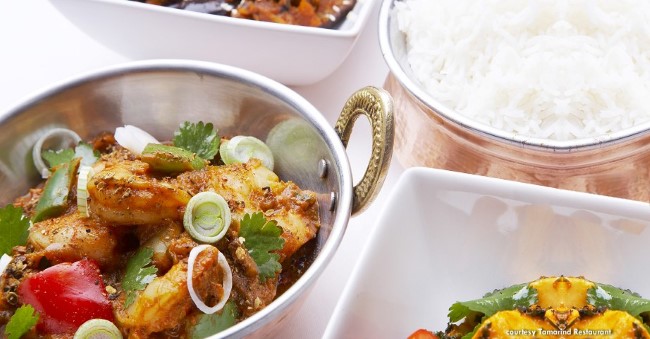 Newport Beach, Calif.--When it was determined that the Michelin-Starred Indian restaurant from London was going to built and open in Newport Beach in the Summer 2011, ooohs and aaahs filled the air. For those who have traveled the world and dined in the heart of Mayfair (London) at the original Tamarind, there's no doubt why Southern Californians are jazzed.

Opening in Crystal Cove Promenade in Newport Coast, Tamarind of London, plans to serve innovative and modern seasonal dishes in an upscale casual atmosphere-- so SoCal! Moghul cuisine will feature fish, meat and game cooked in the authentic tandoor oven style of North West India. Executive Chef Alfred Prasad, the youngest Indian chef to ever receive a Michelin star, applies a creative twist to these dishes.

Treating original Indian dishes with zing, Tamarind's food is a world of flavor.  Stuffed Grilled Potato Pancakes  with a filling of spinach with garlic and dried fenugreek leaves, drizzled with tamarind chutney and Pan Seared Atlantic Scallops with mixed peppercorns, fennel and star-anise, topped with oven roasted peppers, are beginnings to an extensive menu of fish, chicken, tiger prawns, and lamb shanks entrees, to name a few.

Kashmiri Style Lamb Shank slow-cooked with whole spices, yoghurt, saffron and Kashmiri chiles are delightful. Lunch specials such as curry sampler are going to fill up the 144-seat restaurant along the coast overlooking Crystal Cove beaches.  Offering 8-10 creative curries daily, this is a much needed addition to healthy, gourmet dining.  The restaurant will have a full bar with an impressive wine list from around the world, as well as a selection of traditional Indian beverages.

Tamarind of London's sister restaurant in London has been recognized with several top honors over the years, including Michelin stars from 2001 - 2011, and the 2005 Best of Britain award for Restaurant Achievement of the Year.