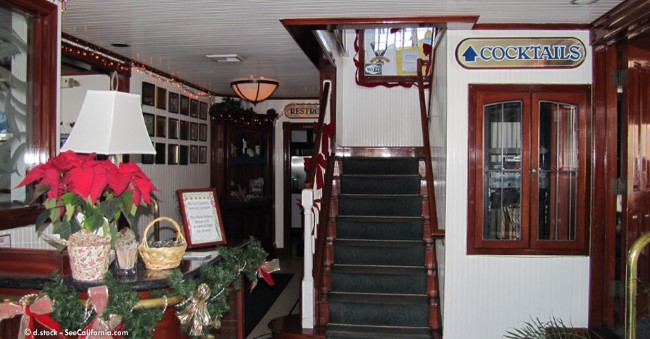 Newport Beach, Calif.--Newport Landing Restaurant is as close as it gets to the Newport Waterfront. Lunch is served on the 2nd floor outdoor patio deck and indoor 2nd level bar while dinner and Sunday Brunch fill the restaurant with the clink of glasses and happy voices.

Known as a restaurant and oyster bar, Newport Landing is named for its location--at Newport Landing. This is where fishing boats, whale watching, and ferry boats ply the waters of Newport Harbor, with many vessels heading out to the Pacific Ocean.

From the upper level deck of the restaurant you can watch the constant, colorful activity in the bay. Unlike other beaches where everyone's a tourist, many people live along Edgewater on the Newport Peninsula where the restaurant is located near Balboa Pavilion. And from your table you can watch the other side of the bay and Bayfront, lined with cottages and castles--some with locals who live there full time, and others are vacation rentals.

The soups--New England Clam Chowder, Chowder Loaf (served in a sourdough bread bowl), and Crab & Artichoke Bisque offer the flavors of the sea...ideal for the location overlooking the inland bay of the Pacific Ocean.

Salads include Caesar, House, or Traditional Cobb loaded with good stuff such as turkey, bacon, avocado, and bleu, all make a great entree, or can be eaten in smaller portions with the soup & salad option.

Sandwiches at lunch are served pretty much when the oyster bar opens at 11 a.m. except on Sundays when there's brunch from 10 a.m. to 2 p.m.

The dinner menu sometimes offers a first seating special with choice of a soup or salad, entree and dessert. It's a pretty good deal you might want to try if you make it between 5-6 p.m. Monday through Friday.

The dinner menu is easy to grasp and offers many temptations. Starters such as oysters, crab cakes and shrimp cocktails don't overwhelm your dinner and go well with anything you order.

The menu is varied with several vegetarian dishes, soups & salads, and healthy light entrees with information such as grams of sodium and fat provided.

For a full-fledged dinner meal, there are around 13 seafood entrees ranging from Halibut, Swordfish, Crab Legs, Lobster and Abalone to Mahi Mahi and Peppered Rare Ahi (all are seasonal selections but generally you'll find them on the menu).

There's a lot less beef than fish but the standards are there--and worth a try. New Zealand Rack of Lamb, BBQ Pork Chops, New York Steak, Hickory Smoked Rib and Filet Mignon, a 7 oz hand cut with cabernet demi glaze range in price from around $15 -30 (subject to change).

A full cocktail bar is served and there are some happy hour cocktail specials in the oyster bar during the late afternoon.