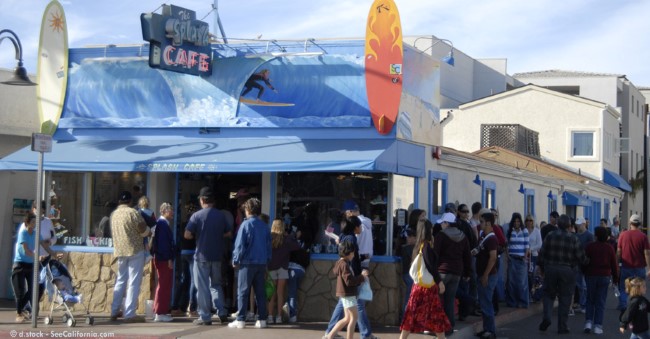 The Splash Cafe in Pismo Beach may have gotten its name from the waves outside the door. With surfboards on the building, beautiful blue waves, and the ocean beckoning, there's plenty to love about its location. But the real "Splash" here is the chow--as in clam chowder.

Don't fret over the line running out the door at Splash Cafe in Pismo Beach. If there isn't one, then it's simply good timing for you. The popular, award-winning clam chowder sold in some California Costco stores is probably the main attraction that has locals and tourists lined up around the corner of the building, waiting for a table.

Pismo Beach, named after the Pismo Clam which was at one time abundant in the Central Coast city and others along the coast, honors the clam with an annual Pismo Beach Clam Festival.

On a daily basis, however, you can honor the clam with a bowl of steamy, hot clam chowder.

Deli sandwiches, seafood platters, tacos, hot dogs, salads and desserts are just some of the offerings at the beach-casual cafe where college student from Cal Poly San Luis Obisp like to go for a an affordable comfort meal.