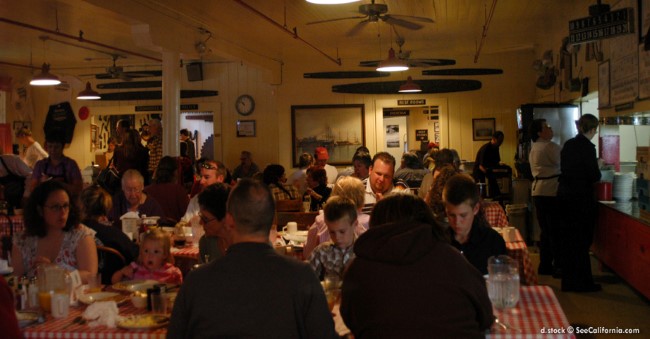 Samoa, Calif.--Samoa Cookhouse is one of the oldest restaurants in California and the last surviving lumberjack camp style cookhouse in the West.

Since 1893 heaping meals have been served to both lumberjacks who the place was originally built for, and now, the public, longing for hearty, American style breakfasts, lunch and dinner meals.

As you enter the old building similar to what many may remember from their church or youth group camping days--with the dining halls tables lined up picnic style--red&white oilcloth covered tables and mismatched chairs,  people sit in long rows with up to 40 diners to a table. You get the feel of what it must have been like for a lumberjack to come in for fueling before he hit the forests and sawed some logs. Waiters & waitresses quickly fill the tables with huge loaves of bread--be sure to leave room for the desserts that will come later.

Amazingly the popular Samoa Cookhouse can serve up to 15,000 people in a single day, and they have done so many times on Mother's Day especially. When you have to wait to find seating, there's a logging museum in one of the rooms next to the dining areas.

The food: The food comes from the local region, and for those who know about the dairy cattle in Humboldt County, suffice to say that choosing eggs, flapjacks, bacon and sausages on the breakfast menu are great choices. The eggs are cooked on a grill and a bowl contains more than two scrimpy eggs from McDonald's or IHOP. Think mega-meals in a lumberjack camp! Like Wisconsin, this area of California makes great cheeses, cream for ice cream desserts, and produce that seems fresh.

From your table you can smell the food cooking, hear the sizzle of the sausage and watch the cook prepare the hundreds of meals within view. Cooking thousands of eggs, sausages, sandwiches and soups is what Samoa Cookhouse does best.

At logging camps, the cook was recognized as one of the most important people. His cooking skills and style created the tone for hard working lumberjacks who burned thousands of calories each day, and longed for something good to eat. Loggers were actually known to leave a camp for better fixins', believe it not!

The Samoa Cookhouse also has three private rooms available for large or small gatherings and a historic logging museum.