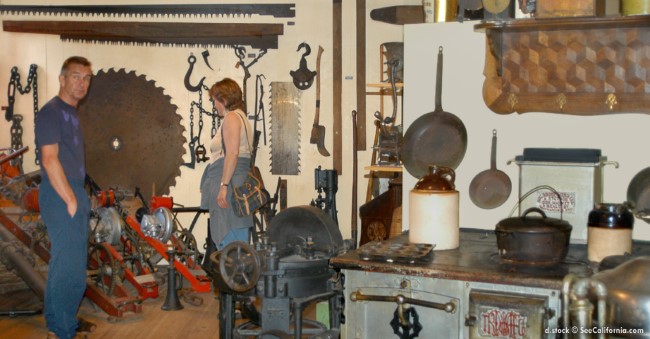 
Samoa, Calif.--Samoa Cookhouse is one of the oldest restaurants in California and the last surviving lumberjack camp style cookhouse in the West. In addition to serving hot meals for breakfast, lunch & dinner, the building also contains a logging museum.

At logging camps, the cook was recognized as one of the most important people. His cooking skills and style created the tone for hard working lumberjacks who burned thousands of calories each day, and longed for something good to eat. Loggers were actually known to leave a camp for better fixins', believe it not! Actual kitchen utensils once used during the 19th-20th century logging era of Samoa includes a stove, pots & pans on exhibit in the logging museum.

The museum houses artifacts from the early logging days as well as implements used in lumber camp kitchens. From old logging boots, saws and machinery to a massive wood-burning stove, the museum is a treasure trove of items from the lumber mill and Cookhouse in Samoa. Visitors can sign the guest book in the museum and quickly discover that tourists come from around the globe to enjoy old-fashioned food service and quality meals cooked fresh daily, while learning about the logging history.

To reach the Cookhouse, take the Samoa Bridge (Hwy. 255) from Eureka, turn left at the end of the bridge on Samoa Road and look for signs.