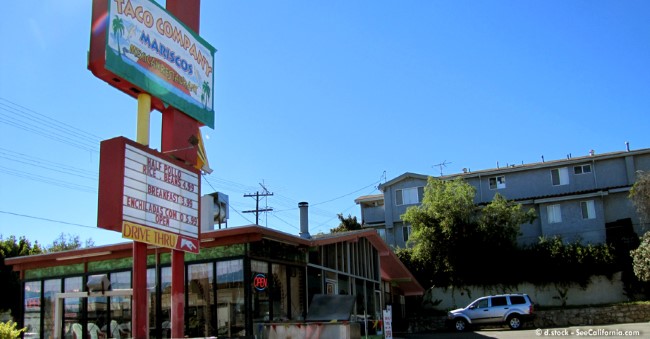 SAN PEDRO, CALIF.-- Our dining experiences in San Pedro have been several misses and finally a hit at Mariscos. The drive-through restaurant on Gaffey Street caught my eye when passing by on a busy Saturday, as I noticed a lady out at a grill where smoke was rising from it. Oooh! Could it be? Smoked meats?

We drove on to our appointment at the White Point Nature Preserve just a few minutes around the bend on Paseo del Mar and when we were done at 4 p.m., I realized I hadn't eaten all day. The rest of the family was so-so about food but the conceded to let me try this place that stayed on my mind. 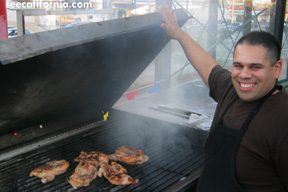 We parked our car and wandered inside, deciding that it would be better to eat there since our drive home could take 45 minutes (it took nearly an hour because of Saturday night traffic on 2nd Street in Belmont Shore.)

A very clean cafe with tables, the evening news on the TV, and three people inside working the counter & drive through didn't give many clues to the popularity of the place. I looked at an extensive menu board filled with all kinds of things--tacos, sandwiches, burritos, carnitas, combos and even a breakfast menu.

"What's on the grill outside?" I asked the nice guy at the counter.

"I want that. How do I order the chicken?" I asked him, trying not to get too excited or hopeful. He pointed to the blackboard in front of me with a Pollo Special-- Half a Chicken, Rice & Beans, and 3 Tortillas for $4.99.  I couldn't believe the low price and asked again if this would include the chicken smoking out on the grill. He assured me it would. The other two in my family ordered it, too.  It normally comes with grilled onions on top, which were great for putting into my tortillas I filled with chicken meat, and dipped in the mild salsa Eddie delivered with a basket of chips to our table.

We absolutely fell in love with the chicken, which included a marinade that was slightly sweet with a hint of spice none of us could figure out. It was just amazing, and the portions were generous.  In fact, we took some of it home and I continued to feast on it, taste by taste throughout the next day.

As we left, we asked Eddie Murillo about the restaurant. It was founded by his father around 15 years ago.  It used to be a dairy drive-through at one time. His father launched his restaurant there after growing a successful food truck business in the area. 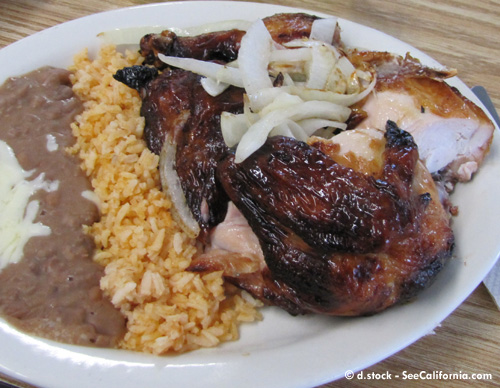 While the restaurant sits next to a KFC, drive right past that place and head straight for Mariscos Taco Company. Eddie said they cook chicken on the grill every day and from our experience there, three of us give it an applaud and highly recommend the chicken smoked on the grill. Delicious!