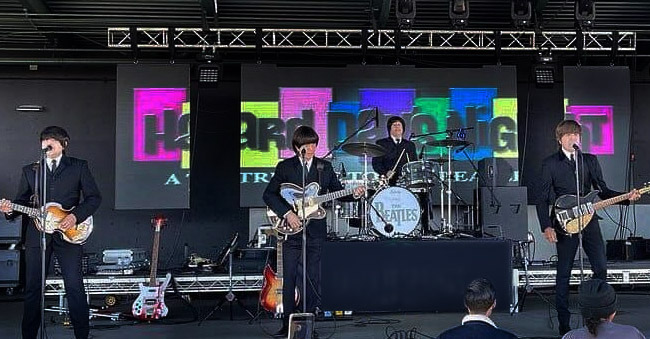 People need a free diversion, and California's got thousands of them with summer concerts in city plazas, bowls, bandshells and parks. Refined are the tastes of consumers shopping for the best places to get their fix in California, which happens to have the largest music industry in the U.S.

According to 50StatesofMusic, California has the largest music industry of all the states, contributing $39.5 billion to State GDP and nearly 431,000 jobs. California also has the largest selection of free summer concerts and tribute bands. So, if you're looking for music medicine, you are in good hands!

A great article by the Lawyer Drummer (lawyerdrummer.com) delves into popularity of tribute bands and discusses how current legislation creates a grey area for courts to decide if tributes have rights to profit off of the originals. He says successful tribute acts can gross over $10,000 a night during peak season, and recommends that these acts, at a minimum, avoid violating copyright & trademark, or use of words like "official" in their promos.

Then there's the issue of original bands disbanding or dieing off to old age. As tributes enthusiastically recreate the glory days, an argument can be made that these bands actually help the originals and their families earn more money.

California is filled with so much musical talent that original musicians have been known to make guest appearances at free summer concerts. Perhaps imitation IS the greatest form of flattery.

With more than 1,000 (mostly) free concerts, The Beatles music was California's favorite, followed by Journey, then The Eagles. Rock music continues to be the most popular choice when it comes to playlists, strictly by the numbers.

The Beatles - 45 concerts. Listen to the music of The Beatles at California's Hard Days and Long Summer Nights concerts featuring bands with names like: The Sun Kings | Sgt. Peppers |4 Lads from Liverpool |Ticket to Ride |The Fab Four | The Fab 8 | Siers Brothers | Mania | Britain's Finest | Hard Day's Night | Drew Harrison | Traveling Wilburys Revue |Rock on Tap | Beatles Flashback | Unfinished with the Beatles. Of course, no band can precisely imitate The Beatles so most offer "experiences" that seek to rekindle the music, magic and fun. Some boast that they have the best or most authentic Beatles look & costumes. It's generally free entertainment, so just enjoy!

Journey - 36 concerts.  The rock band from San Francisco has had over a dozen members during its 50+ years of success. Among the most charismatic members was a singer no longer with them, Steve Perry. What's not to love about this famed singer who was born in Hanford, California? Perry served as the lead singer of Journey during the band's most successful periods, commercially speaking, from 1977 to 1987, and 1995 to 1998. As possibly the most identifiable singer of 80s arena rock, Perry was coined "The Voice," for his countertenor vocal range, which spans from F#2 to A5. You'll be hard pressed to find a vocalist of his range in these tribute band performances, but they play the songs and carry the tunes well enough that audiences want them back, year after year!

Eagles - 27. The Eagles band not only sings songs about California, one of our favorite members, Timothy B. Schmit was born in Oakland, Calif. The music of the Eagles resonates with all age groups, but the older crowd likes to reminisce about the time they saw the Eagles (or Poco, which Schmit was a member of, as well,) perform at .... fill in the blanks. The most popular bands on California's summer concert tribute list happen to be some of the greatest bands to see (or have seen) live. The Eagles band continues to tour the world and sing their famous songs. But catching them in California isn't easy so we've found some tribute concerts.

If you're looking for summer fun you may be amazed to learn that some of the tribute bands appearing free also are booked at casinos and concerts halls with ticketed performances costing $25 or more!