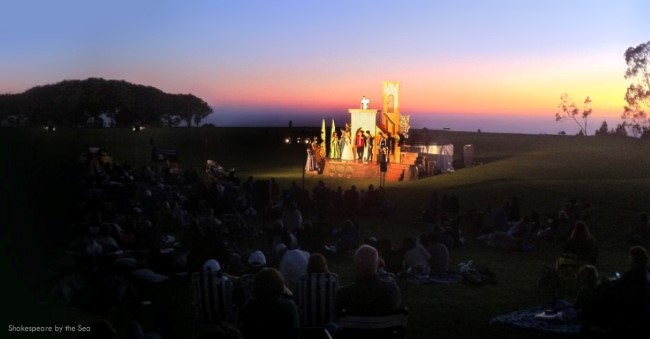 Shakespeare by the Sea

For its stunning 22nd season, Shakespeare by the Sea opens The Comedy of Errors starting June 13 at the seaside Point Fermin Park in San Pedro. Veteran director James Rice helms the mistaken identity romp which culminates in one day of wild mishaps, hijinks, and hilarity.

Aegeon, who has been desperately searching for his lost wife and identical twin sons, lands and is arrested in Ephesus. Coincidentally, his son Antipholus of Syracuse and his manservant, Dromio of Syracuse, have also arrived in Ephesus, which just happens to be the home of their twin brothers, Antipholus of Ephesus and his manservant, Dromio of Ephesus. The brothers, through a series of mistaken identities and missed opportunities, weave their way through arrests, beatings, near-seductions, and infidelities, toward their, hopefully, inevitable reunion.

The Comedy of Errors will be playing in rep with Henry V, opening June 20. Producing Artistic Director Lisa Coffi says, "I am always amazed at how relevant Shakespeare still is today and how you can find common themes running through his plays. This season, both shows feature people who are on a mission. We witness the quests of two men – one who seeks his long-lost brother, and the other who seeks to unite his beloved country. Two very different missions, but both compelling, and when crafted by Shakespeare, enthralling." She continues, "With The Comedy of Errors, we're delighted with the shenanigans that ensue as the story unfolds and are enchanted with the bumbling and fumbling of our twins and the people with which they come in contact."

"The colorful characters, from beautiful courtesans to jealous wives to bumbling, well-meaning servants and friends lead us on a hectically hilarious chase through Ephesus. The Comedy of Errors is the grandfather of all modern comedy," says director Rice. "Mistaken identity comedies from A Flea in Her Ear to Freaky Friday to Three's Company have been inspired by this story."

A professionally-crafted production of William Shakespeare's plays in 20+ parks around Southern California.

Audiences throughout Southern California love Shakespeare by the Sea for its classic Shakespeare plays, presented free of admission in dozens of local parks each summer. The company delivers 40 performances, beginning and ending with its home-town crowd at Point Fermin Park in San Pedro. The tour has become a much-anticipated event each summer, drawing an audience of more than 20,000 to enjoy Shakespeare under the summer sky each of the past several years.

Over six weeks, the all-volunteer company of actors travel city-to-city on their tour to delight crowds before returning to  San Pedro.

Past & Present Shakespeare in the Park Venues