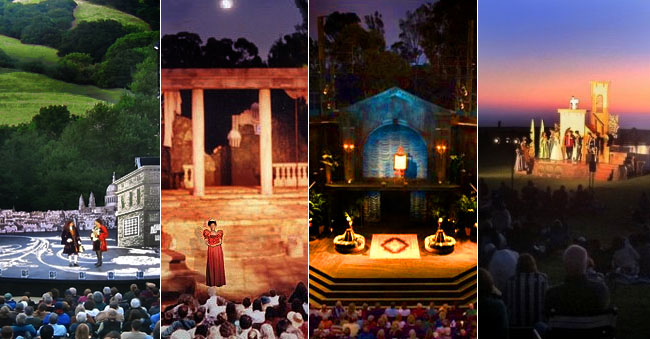 William Shakespeare, considered the finest English playwright and author to ever have graced this planet, live until 1616. His plays continue to provide entertainment and are especially enjoyed by a broader audience during the summer months at Shakespeare in the Park events and festivals. Some plays are actually free to see while others require tickets and charge a fee.

Please confirm before going. These schedules were released months ago and it is possible that some of the dates and productions have changed.

LAKEPORT:  Shakespeare at the Lake July

MERCED: Shakespeare in the Park September 8-16, 2018. The Merry Wives of Windsor
mercedshakespearefest.org


PLEASANTON: Shakespeare in the Park June-July

REDDING: Twelfth Night June 8-10, 2018
Shakespeare in the Park
Riverfront Park Amphitheater
behind Redding Civic Auditorium
700 Auditorium Dr.
Redding, CA
Admission- pay want you can, bardinthepark.org
June 8, 201, 7:30 p.m.
June 9, 2018, 7:30 p.m.
June 10, 2018, 2 p.m.
One of Shakespeare's most beloved romantic comedies comes to Redding this summer. Bring a blanket and a picnic basket to the Park next to the Sundial Bridge.

RIVERSIDE: Shakespeare in the Park  April

SOUTHERN CALIFORNIA: Shakespeare by the Sea

TEMECULA: Shakespeare in the Vines June-August