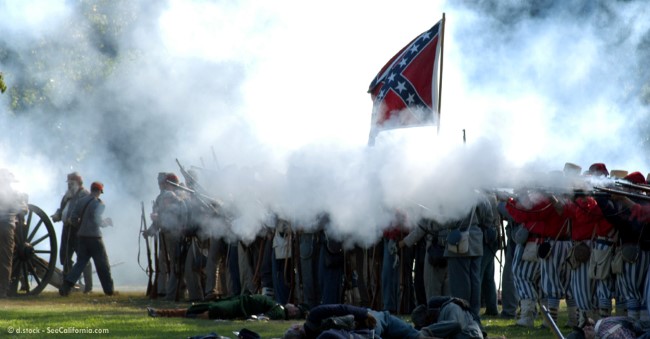 What does California have to do with the nation's Civil War? Quite a bit actually.

There's nothing civil about war, but when you watch a Civil War tribute event, civility shines through as you meet the participants and learn about their passions for honoring those who died in one America's most famous battles.

Why do Californians re-enact the Civil War in annual events around the state? There was never actually a battle on our grounds so what gives? The Civil War is part of the heart & soul of many who reside in California, a state that played a significant role in the Civil War. Though we had just become a state, our formation was one of the important playing cards in the battle that eventually united U.S. citizens under one a nation. For a fascinating journey into the world of the Civil War, see the Drum Barracks Civil War Museum in Banning.

YERMO: Calico Ghost Town Civil War Reenactment February 15-16, 2020, 9 a.m. - 5 p.m.
Calico Ghost in partnership with the American Civil War Society, invites you to witness the Civil War come alive  with the sounds of bugles, and the thunder of cannon and musket fire.

SIMI VALLEY: Civil War Days March 7-8, 2020
Saturday 10 a.m.-4 p.m. | Sunday 10 a.m.-3 p.m.
Strathearn Park
Simi Valley, CA
$7, $3 age 5 to 12 years, Free age 4 and under, simihistory.com
President Lincoln takes a break from his Washington duties to give a speech on the steps of our Strathearn House, where costumed civilians, as well as soldiers from the north and south stand ready in their camps, eager to tell their stories to the passing visitor. Sergeants drill groups of local boys and girls curious to experience military life. Skirmishes, as well as artillery, infantry and cavalry demonstrations take place throughout the weekend.

FELTON: Roaring Camp Civil War Battles and Encampment May 23-25, 2020 | May 24, 2020 is Night of the Encampment
Roaring Camp Railroads
5355 Graham Hill Road
Felton, CA
(831) 335-4484
roaringcamp.com
Memorial Day weekend event features living history demonstrations, drill and several battles. On Memorial Day, a special flag raising ceremony is usually held along with one battle. Travel back in time to the Civil War where encampments of Union and Confederate soldiers transport visitors to the sights and sounds of cavalry charges, musket fire and artillery shells in one of the longest-running historic reenactments in the West. Ride an 1880s "iron horse" through an ancient redwood forest and witness skirmishes as the steam train ascends Bear Mountain. Glimpse a soldier's daily life as he cooks meals over a campfire, cleans his musket and prepares for the day's campaign. Then chow down on a Chuck Wagon Barbecue and take in the camp.

FORT TEJON: Frontier Army Days March 7, 2020
Fort Tejon State Park
parks.ca.gov/?page_id=585
76 miles northwest of Los Angeles along the "Grapevine" section of the I-5 freeway, via the Fort Tejon exit (Exit 210 heading north or south).
Experience frontier California life of the 1850s and 1860s Soldiers and a horse Talk with soldiers who grumble about fatigue details. Visit the blacksmith at his forge, the carpenter in his shop, or the soldiers in the barracks. Servants, cooks, officers, laundresses, and laborers are eager to share their stories with you. Surround yourself with the sounds, sights and colors of the past. Smell and hear the bubbling stew simmering over an open hearth fire place. Hear the musketoons fire, the blast of the cannon, and see clothing of the era. You can witness women mending clothes, soldiers polishing brass, people stomping around in the adobe brick pit, cooks churning butter or children playing a game of graces. Come take a step back in time and join with the men, women and children of Fort Tejon. Relive a day out of the past. Living History demonstrations take place on the first Saturday of each month year around.

Park Day, Saturday, April 4, 2020 Banning Museum, 10:00 am - 12:00 pm
Drum Barracks Civil War Museum and Banning Museum will join together to participate in the American Battlefield Trust's Park Day, a day for giving service at Civil War sites around the country. Join us at 10:00 am at Banning Museum, 401 East "M" Street, Wilmington, CA 90744 to clean wagons and carriages in the stagecoach barn and help get the site ready for spring and summer visitors. The residence of Brigadier General Phineas Banning was built in 1864 and was a frequent gathering place for Union Soldiers stationed at Drum Barracks.

Drum Barracks Civil War Technology Fair, Saturday, June 27, 2020 11:00 am - 4:00 pm FREE
You will be amazed at the science and technology of the 19th century! Wet-plate photography, the telegraph, iron clad ships and submarines, these are just some of the innovations you can explore at the Drum Barracks Civil War Technology Fair. Talk to a blacksmith, learn how a cook prepared food for soldiers, and cover your ears as we fire the cannon. You can also enjoy lectures, self-guided tours of the museum, and a gigantic book sale.

GREENWOOD: Summit Hill Tactical Auburn March 3-5, 2017
March 10-12 are optional rain days
1405 Sliger Mine Road
ncwa1863.org
Reenactors, military and civilians are welcome and encouraged to participate in this living history opportunity. Scenarios will develop as terrain and imagination dictate. This is the chance to use your mind and skills. Event Coordinator: Skott Borello, Captain 9th Virginia Cav. (530) 886-8822

OAKDALE March 11, 2017
Posted on acwa.org/events and knightsferry.com
Knights Ferry Recreation Area
If you have a question about the Recreation Area, please call 209-881-3517
Knight's Ferry is a park in the foothills of the Sierras 12 miles east of Oakdale on Highway 108 and Stanislaus river near the Tuolomne/ Stanislaus County border.  U.S. Army Corps of Engineers operates the park which features a 330' covered bridge built in 1863, many historic civil war era buildings and home to a Native American battle in 1829.

MARIPOSA: Las Mariposas Civil War Days April 21-22, 2018
Yaqui Gulch Road
Mariposa, CA
mariposacivilwardays.com
$7 admission approx.
A true revival of this period, the Las Mariposas Civil War Days are held on the actual site of this grant on over 60 acres of Longs' Mariposa Ranch, nestled in the beautiful Sierra Foothills of Northern California. The most Authentic Civil War reenactment west of the Rockies on Longs' Mariposa Ranch, includes tactical foot and horse skirmishes and cannon fire. Saturday and Sunday are both jammed full of events including two battles each day, AND a twilight battle on Saturday night. Throughout both days there will be a multitude of other events happening at the camps which the public are invited to attend and observe. Experience first hand a medical station, a blacksmith, a civilian town, cooking and sewing, and other aspects of life during this historical period. Don't miss hearing Abraham Lincoln recite the Gettysburg Address or Jefferson Davis as he dispels the rumors from the Federal Camp. Listen to Harriet Tubman, Sojourner Truth, and Clara Barton describe their lives and what it was like to be a slave. A variety of period sutlers and food vendors will be on site.

SAN FRANCISCO'S FORT POINT Civil War Days August 19-20, 2017
20thmainecompanyg.com
Battles Saturday 1 & 4 p.m. | Sunday 11 a.m. & 2 p.m.
Infantry drills occur almost every hour on the hour. Artillery discussions occur every hour on the half hour. There are also concurrent demonstrations throughout the day - medical demos, musician--fife / drum and brass band-- and civilians, camp laundress, sewing, and more. Join Civil War reenactors in the Sesquicentennial commemoration of the Civil War 2011-2015, as they bring Fort Point to life with music, marching, artillery drill, musician demonstrations, and the colorful uniforms of Civil War soldiers and civilians. Talks and demonstrations are held throughout the day. Take a tour by a Park Volunteer to learn about California's role in the Civil War. Call (415) 556-1693 or go to www.20thmaine.net for more information. FREE admission.
Location: Long Avenue and Marine Drive, Building 999, Presidio of San Francisco, CA. parkconservancy.org

Civil War reenactors (actors who pretend they are Civil War participants) participate in approx. a dozen Civil War reenactments each year. The events held throughout California often feature vendors selling Civil War era replica products such as books, clothing, buttons, dolls and flags. The food vendors stick with more modern eats such as soda in cans, bottled water, hot dogs and hamburgers, but sometimes include ears of corn cooked on the grill. Then there's the main event–battles. The guns fired don't actually have bullets and the cannons only blast smoke and noise (minus projectiles that would have been used in a real battlefield,) but the special effects are pretty convincing as soldiers drop to the ground as if they'd been struck. Children watching these mock battles do reality checks with their parents and are assured that no one is hurt.