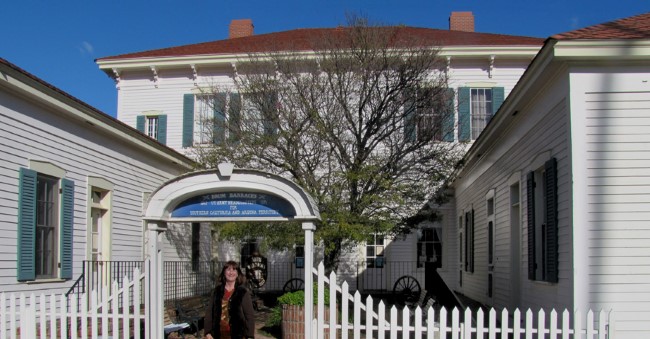 WILMINGTON, CA--An actual Gatling Gun, rifles, swords, uniforms, barracks, handmade figures, antique dioramas, military illustrations, exhibits with "wow!" and so much more can be seen here at the incredible Drum Barracks Civil War Museum, housed in the last remaining wood building that was part of a 22 structure, 60-acre US Army Headquarters for Southern California and the Arizona Territory from 1862-1871.

But seeing the impressive structure and museum is only half the amazement. Hearing what the talented docents explain is even more sensational. Visitors learn how the Civil War produced the first workable machine gun, steel ship, snorkel, aerial reconnaissance, anti-aircraft fire, electrically exploded bombs and torpedoes, ironclad navies, repeating rifles and so much more.

You'll learn how troops stationed at what was first called Camp Drum (after Richard Coulter Drum, Assistant Adjutant General of the Department of the Pacific) helped keep California in the Union and secured the territory that is now Arizona and New Mexico for the Union. You'll learn the fascinating story about the camels once sationed here (that carried supplies, soldiers and scouts); how a new kind of bullet was developed that resulted in greater accuracy and longer distance of fire; the creation of repeating rifles, which would fire seven shots without reloading; how the US Balloon Corps used aerial surveillance to bring a whole new viewpoint to the battlefield and may have landed on the first aircraft carrier (which happened to be a barge); how women were used as military nurses for the first time in US History; remarkable true stories about Abraham Lincoln, Union and the Confederate soldiers, and you'll hear about (and see) the fabulous contents from one of the most unusual Autograph Books in existence. Capt. G. Edwin Dunbar got the signatures of 50 Union Generals, 1 Confederate General, 3 US Presidents and several celebrities like "Buffalo Bill Cody and Edwin Booth.

Museum Director Susan Ogle and her docents explain and show (to school kids and people of all ages) wonderful exhibits on California's Political, Social and Economic role in the Civil War and how many feel the entrance of the new state into the Union, led to the real beginning of the the war. You'll learn fascinating facts about soldiers stationed on Catalina Island; the role of gold from California mines, and how somewhere between 618,000-700,000 Americans died in the Civil War, exceeding the nation's loss in in all of its other wars.

Civil War researchers will find a superb library on the property, owned by the State of California and leased to the City of Los Angeles. Located at 1052 N. Banning Blvd., Wilmington, it has tours at 10 and 11:30, Tuesday, Wednesday and Thursday, and 11:30 and 1 on Saturday and Sunday. Be sure and check their website for Special Events and further information, www.drumbarracks.org or call 310-548-7509.