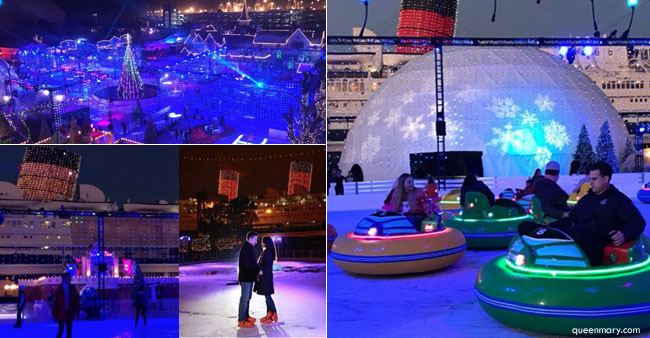 This story was written for CHILL'S inaugural season in 2012. Details have changed since the attraction was first introduced.

Long Beach, CA--The legendary Queen Mary's new holiday Chill attraction adds reality to the term, "Chill Out" and it creates a new definition of "Chill In."

The Queen Mary, in partnership with International Special Attractions (ISA), features the 13,000-square-foot Ice Kingdom at Chill. Currently, more than 2 million pounds of ice are miraculously becoming a sculptured Winter Wonderland inside the Dome that once housed the Spruce Goose.

"It's the World's Largest Igloo, with cold Arctic air and we even loan parkas to guests," Steve Sheldon, Director of Events, told Long Beach Mayor Bob Foster at a preview of the rising "awe." Thirty Chinese artists are busily creating a spectacular gallery of giant ice sculptures that have to be seen to be believed. One's of the Queen Mary, complete with an ice slide which Mayor Foster joyfully took down to the main floor. Another is a walk-through Fairy Tale Castle. Others include a Nativity Scene, Santa's Toyland and more.

Over 36 truckloads of ice, including 4,500 blocks, have been brought to Chill to make the absolutely amazing Wonderland, painstakingly created by some of the World's top artists. Haiping Ge, President/CEO of ISA, said he's thrilled to bring this World-Class spectacle to the Queen Mary. "It's creating a new holiday tradition that will thrill and chill everyone who sees it," Ge said. "Some of the ice carvings are 24 feet tall. They're like those made famous at the Winter Festival in Harbin, China."

Near the huge "igloo," a 100-foot long Ice Tube is being created, where people can speed down an ice hill at sleigh ride speeds. Close by, beneath the majestic Queen Mary, a 6,500-square-foot Ice Skating Rink is taking shape. A Holiday Village will feature entertainment, gingerbread home decorating, a Candy Maze, photos with Santa and more.

Managing Director of the Queen Mary, said what better place to have Chill for the holidays than at the Queen Mary, itself an international spectacle of elegance. More than 200,000 people are expected to visit Chill, enjoying the unique spectacle, skating and tubing.

Make your plans now. This is an event you won't want to miss. It will not only be the talk of the town but a fun memory you will never forget!

Other events at The Queen Mary include the Diana exhibit offering a rare glimpse into the lives of British royalty and the perhaps the most famous princess that has ever lived!