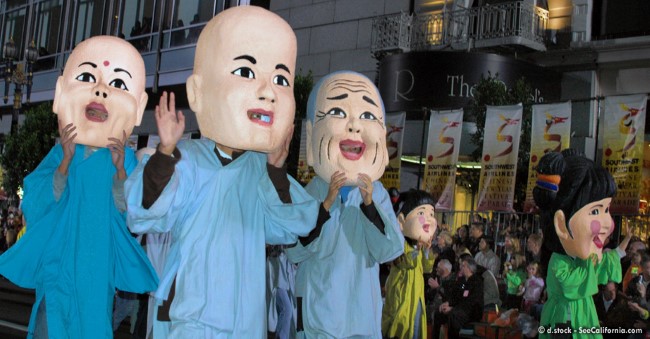 Year of the Tiger

Parade Route: Starts at Market (at 2nd), turns before 3rd onto Geary, turns on Powell and goes one block to Post where it backtracks on Post parallel to Geary, turns on Kearney and ends just beyond Washington.

Though many events surround the Chinese New Year Parade in San Francisco, the annual parade is no doubt the highlight to ring in the New Year celebrated usually in February. Since 1958 this grand event has been under the direction of the Chinese Chamber of Commerce, though it was found shortly after the Gold Rush which ended in the 1850s. The sponsorship is strong, and the turnout is massive. Hundreds of thousands of people line the parade route, so the best way to see it is to book a hotel room at one of the hotels near the parade such as Hotel Nikko.

Enjoy dance and music from throughout Asia and experience ancient and modern Chinese arts such as calligraphy, kite-making and acrobatics.

SF Chinese Chamber of Commerce presents event in which 100 Choy Suns  grace Grant Ave and pass out thousands of  Lai Sees to eagerly waiting children. All the  Lai Sees will contain a chocolate gold coin. Additionally, some will have either money or a gift certificate that can be redeemed for a toy. Choy Sun, the god of wealth, is a deity that every Chinese person welcomes. He blesses everyone he encounters with much prosperity and abundant wealth. Lai Sees (red envelopes) are passed out to children and unmarried persons during Chinese New Year as a good luck symbol, with the belief that the more  Lai Sees one passes out, the more good luck will be returned.

Chinese New Year Run starts at 8 a.m.  This scenic route starts at Sacramento and Grant, winds its way through Chinatown, North Beach, the Embarcadero, Downtown and finishes on Kearny between California and Sacramento. The proceeds from the run benefit the Chinatown YMCA Community Center, which serves more than 1,200 youth and their families from Chinatown and the surrounding neighborhoods. The event expects 1,700 participants and 250 volunteers.

SF Chinese Chamber of Commerce and Southwest Airlines  Basketball Jamboree kick off the Year of the Pig with some exciting basketball games. There are 3 slots for each division (boys and girls), resulting in approximately 60 players. This event also showcases the adult alumni who lend their support and volunteer their time as referees and provide support to this next generation of our youth.  contact Kenny Lee, hoopsterslee@gmail.com

A spectacular 268' Golden Dragon (Gum Lung) is one of many highlights. It takes a team of over 100 men and women from a martial arts group to carry this dragon throughout the streets of San Francisco. The parade sprang out of the California Gold Rush (circa 1850) and has grown to become the best known Chinese New Year celebration in America.

Gorgeous floats, elaborate costumes, ferocious lions, exploding firecrackers,  newly crowned Miss Chinatown U.S.A. and her court, and nearly every politician in a who's who is in attendance either riding in the parade or watching.

A crowd favorite is the spectacular 250' Golden Dragon - Gum Lung.  It takes over 100 men and women from a martial arts group to carry this dragon throughout the streets of San Francisco.

Other festivals in San Francisco: