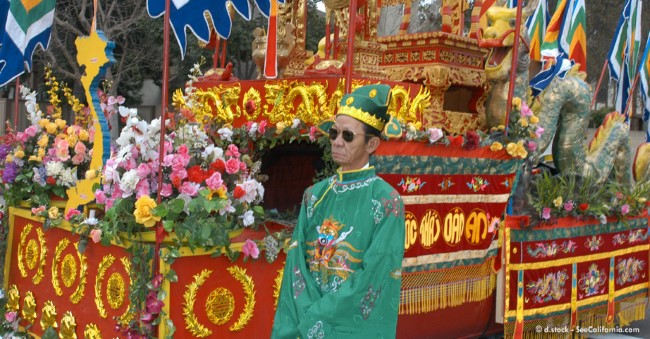 There's really only one way to immerse yourself in an event and that is to actually participate in it.

Having done so with the TET Parade in Westminster, California, I walked the route with representatives of a company that was a sponsor. Seeing the crowds lining the streets was interesting, but honestly, the best joy is in being a spectator at this colorful, cultural event that showcases, rich tapestries, intricate costumes, and festive floats unlike most you'll see on the coast.

The Tet Parade has been hosted many years, but some years the event is not held, depending on sponsorships, etc. On the years that it does go forward, the event includes a launch celebration in a parking lot in which the officials appease the dragon by serving fruits & gifts to the fictional character that dances and moves around. Many firecrackers are set off so the air is filled with smoke and noise.

The parade marches along the streets of Westminster with bands comprised of young violinists (girls dressed in silky, long dresses,) traditional Vietnamese attire that is elegant, bright and contains lots of silk & sashes, and some of the name singers and actors in the Vietnamese world of  entertainment.

After the parade attendees stick around for displays from community groups at the Asian Garden Mall.