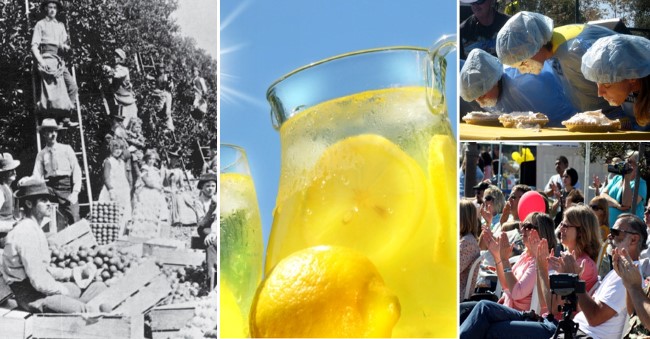 California is the land of lemons-- and we don't mean lemon laws and rotten lemon products that fail you. We're talking nature's best! Be proud, you fantastic lemons and stand up to society. The saying -- when you get lemons (bad things), make lemonade, doesn't properly credit this under-credited fruit. Lemons are a must in any culinary environment. Lemon's acidic qualities help naturally slow the browning process of apples, lemons are used in beverages to help with sinus problems, and lemon juice offers fantastic accents to sweet foods, providing balance that appeals to the taste buds.

Can you imagine life without lemon? Think about what it would be like to not have lemon for your lobster butter. Or what about the cool refresher--a tall, iced glass of lemonade with its sweet, tart taste. Ahhh- lemons!

Lemon Festival Highlights
The Lemon Festival celebrates the heritage of Chula Vista as the city was once self-proclaimed "Lemon Capital of the World" in the 1920's.

For many early years, Corona's growth came in part through the climatic hospitality and agricultural fame of lemons and other citrus fruits. The height of production was in 1935 where 2,406 acres of lemon groves were harvested, filling 1,138 railroad cars for delivery to market. Corona became part of history as The Lemon Capitol of the World.

Tree Tour
Discover interesting facts on the park's wide variety of mature specimen trees from around the world. Walk through a producing lemon grove and learn how Corona was once famous as The Lemon Capital of the World. coronaheritage.org


Santa Paula - Today, Limoneira maintains a demonstration orchard of over 300 citrus varieties on Limoneira Ranch property in Santa Paula. They partner with the University of California's Agriculture and Natural Resources Program to further agriculture's forward momentum, and they work with leading partners in our Northern and Southern farming operations to grow, harvest and pack efficiently and sustainability.

Sometimes, the old ways are the best ways. Limoneira's Mediterranean style packing house built in the 1920's received recognition for its classic design from the Southern California Chapter of the American Institute of Architects in the early twentieth century. After all these years, it still operates at peak performance. 1,870 acres of lemons throughout California, Limoneira is one of the largest lemon producers in North America. 119 years of operation


If you love apricots, you'll also want to check out California apples and California almonds.