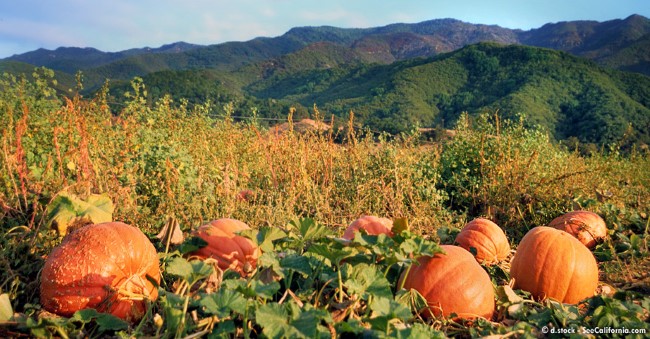 If you're a pumpkin junkie you are not alone. California purchases and consumes the most pumpkin products of any state and we also tout the most pumpkin festivals and highest attendance.  There's more to pumpkins than meats the eye.

On SeeCalifornia site we've posted dozens of articles about pumpkin festivals, events and other pumpkin stuff. Here's our list of pumpkin coverage.

California purchases and consumes the most pumpkin products of any state and we also tout the most pumpkin festivals and highest attendance, reflecting California's love of the seasonal fruit served in pies, souffles, bisque and breads. We're by no means the largest grower of pumpkins, however. We traditionally rank second to Illinois, producing two pumpkins for every five the Midwestern state grows. California doesn't even set records on growing size, though our pumpkin festivals are known to register many giants.

For those who love pumpkin pie you can purchase a 58oz (3.62 pound) pie at Costco for $5.99, clearly the best deal around! Whole Foods, Sprouts and Trader Joe's all feature pumpkin flavored products ranging from cereal and oatmeal to cookies, ice cream, spreads, syrups and even chips. Yum. If you're looking for cheaper offerings Thrifty usually has seasonal pumpkin ice cream at a fraction of the price of Trader Joe's or B&R. Take the taste test and you decide.

Pumpkin is a great source of dietary fiber 16%, plus protein, calcium and potassium and is used to treat cats & dogs with digestive problems. The only word of advice we'd like to offer in this beloved pumpkin season is "moderation". One 8 oz. slice of pumpkin pie contains 22% of your recommended daily allowance of cholesterol and 25% of saturated fat. Double that amount in an oversized slice of Costco pumpkin pie and you're looking at 650 calories and nearly three hours of walking to wear it off!

The U.S. pumpkin market is regarded as limited and seasonal. Pumpkins are grown primarily for processing with a small percentage grown for ornamental sales through you-pick farms, farmers' markets and retail sales. In 2012, nearly 12.4 million cwt of pumpkins were harvested from 47,800 acres. The top pumpkin production state was Illinois, followed by California, Ohio, Pennsylvania, New York and Michigan.

University of Illinois claims 90% of the pumpkins grown in the United States are raised within a 90-mile radius of Peoria, Illinois. Most pumpkins are processed into canned pumpkin and canned pie mix. Processing pumpkins have a comparable size and shape of a watermelon and a lighter colored shell. The town of Morton, near Peoria in central Illinois, is the self-proclaimed Pumpkin Capital of the World. Morton is the location of a Libby's pumpkin processing plant owned by Nestlé Food Company, which cans more than 85 percent of the world's pumpkin each year.

Pumpkins in the 10- to 25-pound range are primarily used for jack-o-lanterns and can also be used for processing.