Peacock Day returns to the Arboretum. The peacocks are in their full plumage for the spring mating season.

The 200 birds at the Arboretum are descendants of peafowl brought from India in the late 1880s by Elias J. (Lucky) Baldwin, a wealthy businessman who had a huge and prosperous ranch on the site that became the Arboretum.

The Arboretum devotes the day to celebrating and sharing the history, science and beauty of these lovely birds.

Like so many visitors, I have sat under the shade of a tree for summer concerts at the Arboretum, and heard the screeching of a peacock in a limb above as the concert band played on.

Even though peacocks are quite common in zoos and gardens throughout California, they never cease to make an impression both for their appearance (size and feather displays,) and their behavior. A few national zoos have removed peafowl for aggressively trying to grab food from kids or other annoyances.

A love-hate peacock story exists in one Southern California town where peafowl have been a 100-year fixture documented by author Mary Jo Hazard in her book, "The Peacocks of Palos Verdes." 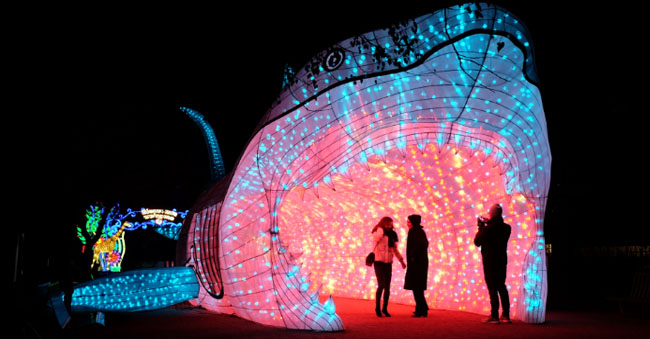 Los Angeles County Arboretum and Botanic Garden brings back the Moonlight Forest for a second year due to overwhelming support from the community! This year the Moonlight Forest is bigger and brighter than ever with two new themes, Polar Dreams and Ocean Visions. Step into a winter wonderland with our new Polar Dreams experience featuring playful penguins and cuddly sled dogs. Next, dive under the sea with exotic fish and giant sharks in our Ocean Visions exhibit. When: Wednesday - Sunday