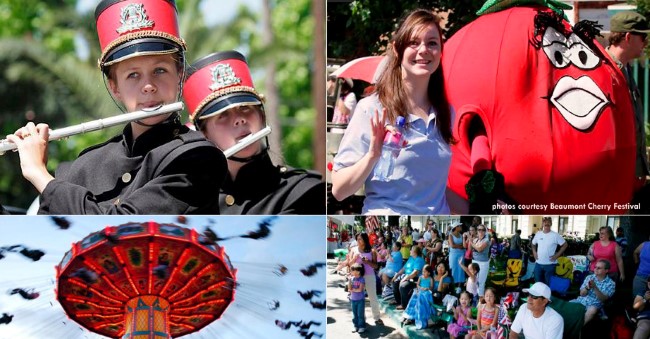 The Saturday parade at 10:30 a.m. route begins at 12th St. and Beaumont Ave., will proceed south down Beaumont Ave., and will end on 6th St., at the City Hall.

Festival shuttle buses run every half hour from Walmart Parking lot on 2nd Street, and the Sports Park at Brookside and Beaumont Ave.

The Cherry Festival Parade is arranged by the Beaumont-Cherry Valley Rotary club and features marching bands, dancers, floats, and a special Grand Marshall!

The annual Cherry Fest Car and Motorcycle show is held before the Cherry Festival. The car show will take place at Stewart Park in Beaumont (corner of 9th St. and Orange St). The car show is hosted by the Beaumont Kiwanis and the City of Beaumont. There is no admission cost for spectators!

Cherry Valley Lakes between Redlands, Beaumont and Banning, along Highway 79 near Lake Perris and the San Jacinto Reservoir is part of the Riverside -San Bernardino area. Cherry Valley was originally called Apple Valley. In 1885 cherry trees were planted along with apples, plums, peaches, olives, walnuts and apricots. Street names reflect the fruit trees that were grown.

Cherry Valley Festival Queen was contest began in the 1930s.

The U-Pick Cherry System, where people pick their own cherries, started in 1941 during WWII.

Cherry Festival Association was formed in 1952. It incepted an annual program of a carnival, concession stands and an Art and Horse Show.

Today, the four day festival festival features a parade, booths, music, rides, live entertainment and much more. The parade parade begins on Beaumont Avenue and ends at City Hall on Sixth Street. The Cherry Harvest doesn't always come during the festival as it varies from year to year depending on the weather. The Cherry season usually only lasts for about a month each year.