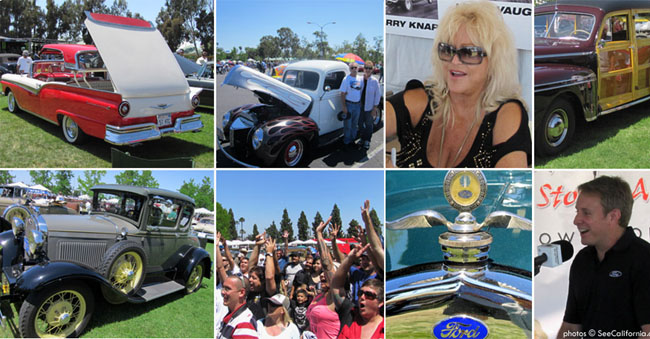 Anaheim, California -- More than 20,000 people attend the spectacular Annual Fabulous Fords Forever Show which moved from Knott's Berry Farm to Anaheim in 2019, and then to Irwindale in 2022. Spectators see more than 2,100 Ford, Mercury and Lincoln vehicles from 13 states, Canada and Mexico. Ranging from Model Ts and Model As to Mustangs, Broncos and Thunderbirds, the fun event includes special guests such as Henry Ford III (right photo.) He is the great-great-grandson of the famous founder. Linda Vaughn (top photo- 2nd from right,) The First Lady of Drag Racing, signed autographs alongside Ford Drag Team” Race Legend Ed Terry. The endless sea of beautiful cars was really something to behold.

Sebastien Bourdais: The star French driver who co-drove the winning Ford GT in the 2016 Le Mans 20 Hours and this year's Daytona 24 Hours! Sebastien will be joining us fresh from his appearance in the Phoenix Grand Prix IndyCar race on April 29th!
Camilo Pardo: who was tapped by Ford Motor Company as Chief Designer for the Ford GT and the SVT Studio to design the 2005 and 2006 production Ford GT
Donald Farr: a noted Mustang authority with is new book "Ford Mustang: America's Original Pony Car"
Tom Loeser: celebrated auto photographer with is exquisite book featuring his photos and text by Donald Far "Art of the Mustang"
Donald and Tom will have their books available at the show for purchase and in-person autograph signing.
Linda Vaughn and Rob Kinnan: promoting their book "Linda Vaughn, the First Lady of Motorsports"
Steve Saleen: Who's legendary Saleen vehicles including the Saleen S7 and Saleen Mustang have a huge fan base
Donny Caccamise and Tom Spence: Host the national Horsepower for an Hour radio show and will be on stage throughout the day