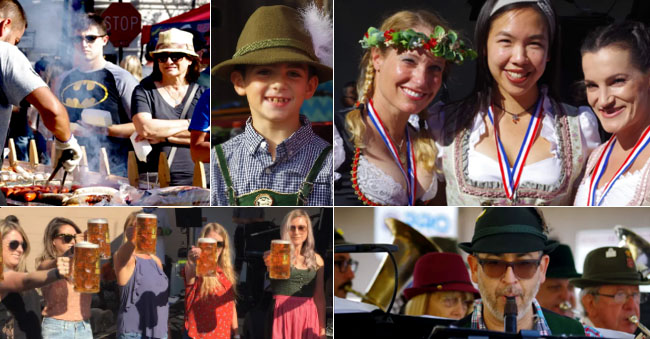 Campbell's own Oktoberfest features mouth-watering savory German foods including Bratwurst, sauerkraut, pretzels and German potato salad, a variety of beers and ales, over 100 fine artisans from all over the country and an impressive line-up of entertainment.

Hosted by the Campbell Chamber of Commerce, this annual festival was voted Best Local Festival. It's an entire weekend of live music, tasty food, arts and crafts, a KidsZone and, beer. This two-day Bavarian-themed event in historic downtown Campbell showcases Bratwurst, sausages, sauerkraut, pretzels and German potato salad, a variety of beers and ales and  German foods.

Over 100 fine artisans from all over the country and an impressive line-up of live music and entertainment. The Biersch Garden is an open-air tent with family-style seating offering a shaded place to eat, drink, and listen to live German music. Wine Central offers premium wine tasting from local wineries, and the KidsZone is designed for kids of all ages to enjoy music, rides, a fire truck, inflatables, and more make this a peak attraction.

This Fall Festival every year in downtown Campbell California celebrates the harvest which is especially important to this community whose roots are in the agricultural past of the area. Music, art, dancing, food, and great beer attract thousands of people.

This event is held on the Third weekend of October every year. It starts at 10 am and ends at 6 p.m. on Saturday and 5 p.m. on Sunday.

Oktoberfest
Once upon a time, long long ago in a far away land known as Bavaria, a Crown Prince - who later became King Ludwig I - married the beautiful Princess Therese von Sachesen-Hildenburghausen. The loyal soldiers in the Prince's National Guard thought that the horse races would be a most fitting way to celebrate the happy event. King Max, proud father of the Prince, gave his consent to the races and so they became the finale of five days of wedding festivities on October 17, 1810. This was the unlikely beginning of Oktoberfest. The horse races became an annual event and were combined with the state agricultural fair the following year. It wasn't until 1818, that booths, serving food and drink, were set up at the event. In the late 1800's, the booths had grown into large beer halls or tents, which are still set up each year on the Theresienwiese named in honor of Ludwig's bride.