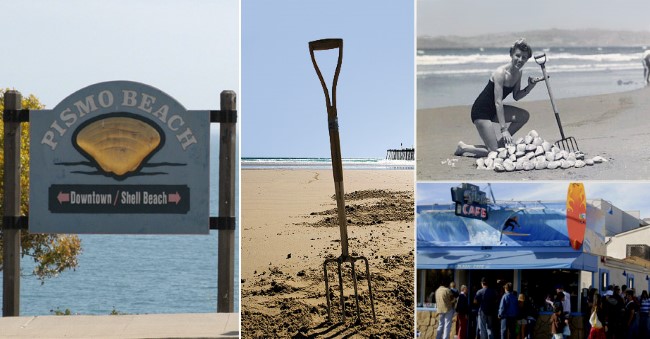 Festival: Pismo Beach, known for its clam chowder-serving cafes, is tasty destination as beaches go. For seven decades the Central Coast city has celebrated clams with a festival at the beach, featuring a clam dig contest, clam chowder cook-off and beautiful ocean setting.

Factoid: Pismo Beach is home to the largest Pismo clam recorded in California, 7.37-inches across and 26 years old approx.

If you can't attend the event you can still taste the best clam chowder on the coast at Splash Cafe in Pismo Beach.

Clamming: Sports fishermen harvest  Pismo clams using six-tined potato forks. The digger works backward in a line parallel to the edge of the water probing with the fork, increasing the success rate with the broad side of the clam presented to the fork. Working parallel to the water is also a good safety practice.

Advice:  Pismo clams have been linked to several human fatalities involving Paralytic Shellfish Poisoning (PSP). Therefore, it is advised that only the white meat be consumed and all dark meat and digestive organs be discarded.

To prevent  massive depletion recreational clamming is  regulated by a 10 per day bag limit and a minimum size of 4.5 inches  south of San Luis Obispo-Monterey County Line and 5 inches north of it. (wildlife.ca.gov)

Historically the epicenter of recreational clamming was Pismo Beach. Over a 75 day period in 1949 more than 2 million clams were caught on a stretch of beach that had just been reopened to digging after being closed for 20 years. An estimated 5,000 diggers per day came, leaving behind around one million undersized clams stranded on the surface and wasted.

Pismo clams mature after their  second winter in central and northern California. Spawning usually begins in late July or early August and continues through November.

The Pismo clam invertebrate species once supported a significant commercial fishery and harvest which began in the early 1900s when horse-drawn plows were used to rake the beaches. By 1911 popularity of Pismo clam meat for human consumption had grown in the historic epicenter of recreational clamming. Shortly after the clam festival was launched in 1946 (bottom-left photo) an estimated 5,000 diggers per day harvested clams. Today legal size clams of 4.5″ are harder to come by and the bag limit is 10 per day.

LARGEST: The largest Pismo clam recorded in California came from Pismo Beach. It was 7.37-inches across and estimated to be 26 years old.
OLDEST: The oldest Pismo clam on record was estimated to be 53 years old.
GROWTH RINGS: The age of Pismo clams can be determined by the concentric growth rings on the shell.
The Pismo clam grows continuously throughout its life.
Fossil remains of Pismo clams have been found in Pleistocene deposits at least 25,000 years old
The Pismo clam prefers warmer waters south of Half Moon Bay; it doesn’t fare well in cold waters.
PREDATORS include humans, sharks, rays, gulls, sea otters and some species of surf fish.