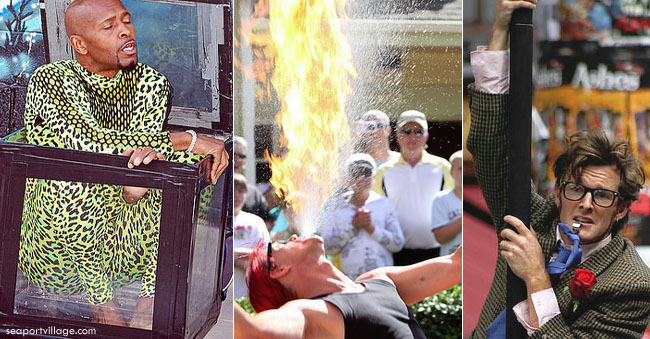 SAN DIEGO, CALIF. — First off, you need to know what a busker is... it's a term to describe a street performer who usually works for tips. The unusual and comedic acts that grab the attention of passers-by, are what give buskers their reputation as talents in their own right. If a show doesn't engage, the street artist re-works his or her material. Busker entertainment ranges from mime, acrobatics, fire and flames to balloons and props. Buskers pull out al the stops.

Kelvin Gordon – the contortionist brings a highly flexible act to this year's Busker Festival. He demonstrates his talents in a variety of ways, including folding himself inside a clear Plexiglas box!
Murrugun the Mystic – is known worldwide for his spectacular fire eating, sword swallowing and a bed of nails acts.
Derek McAlister – The Twin Tango and Derek Derek is a character performer, juggler and comedian with two separate performances filled with mime, fire juggling, comedy, breathtaking acrobatics and a 20-foot Chinese pole.

Other art events that are quite popular in San Diego include the La Jolla Art Show which takes to the streets of La Jolla each summer.

Another art-inspired event with a reputation for being anything but ordinary is the quirky but extremely popular Fringe Festival.