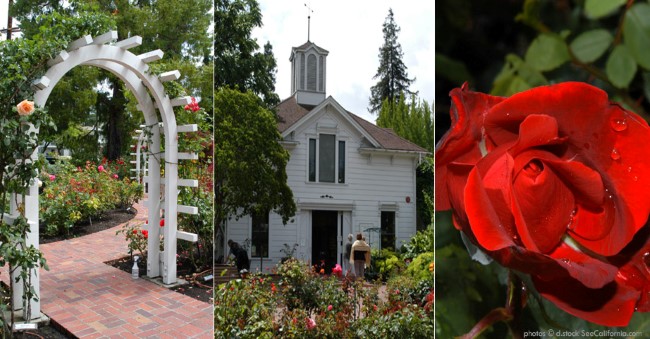 Santa Rosa, CA-- A beautiful stop during road trips in Sonoma County's beautiful Santa Rosa live up to the "rosa" with the Luther Burbank roses at the museum / house you can visit and tour during part of the year (usually April through October.)

The inventor's Home, Greenhouse, and Gardens where world-renowned horticulturist, Luther Burbank, lived and experimented with plants for most of his 50-year career are listed on the National, State & City Historic Landmark registries, and are open to the public.

It doesn't take long to tour the gardens and home that are small in comparison to the Winchester Mystery House in San Jose, but there's much to explore and learn about the legend of food & flowers. You can visit the Burbank Home, Greenhouse, and Carriage House Museum and Gift Shop.

Born during the California Gold Rush, that event was played out by the time Burbank arrived in California, departing his Lancaster, Mass. home. He loved California, its growing seasons and mild weather that allowed him to carry out his experiments year round, planting, cultivating and creating. He found Santa Rosa so appealing, he lived there 50 years, conducting plant-breeding experiments that brought him world fame as a horticulturist, and one of the greatest contributors to feeding the world through his successful experiments.

He sought to increase the world's food supply by manipulating the characteristics of plants and successfully created over 800 new varieties of fruits, vegetables, nuts, grains, cacti, and ornamental flowers.

Burbank worked hard and had many prominent friends such as inventors Thomas Edison and Henry Ford, who both visited his Santa Rosa home. He died in 1926 at the age of 77 and was buried near his greenhouse on the grounds of his home, with an unmarked grave that he requested before he died.  At his widow's request the central garden was redesigned to reflect Luther Burbank's wish for a design using plants, wood, stone, and water. Remaining unchanged today, that garden was dedicated in 1960 as a memorial park. The annual Luther Burbank Rose Parade Festival held in May celebrates Burbank's memory. - roseparadefestival.com

The Luther Burbank Home & Gardens Board and City staff cooperatively oversee and maintain the property. The site is open to the public and its programs are staffed by volunteers. Visitors are welcome in the gardens, free of charge, every day of the year.

Luther Burbank's fame as an inventor of new fruits, plants and flowers inspired world-wide interest in plant breeding, for which he was recognized by an Act of Congress.

While so much of Burbank's life seemed "rosy", the man was not without controversy. He went public with his philosophies on life and created a storm of interest when he challenged on his belief in Darwinism, and on the afterlife.

"I must believe that rather than the survival of all, we must look for survival only in the spirit of the good we have done in passing through. This is as feasible and credible as Henry Ford's own practice of discarding the old models of his automobile," said Burbank in response to Ford's contention that reincarnation exists.

There's no doubt that the spirit of a man and his love of flowers exists in Santa Rosa. Do visit the museum, house and gardens if you can. It's worth it.

If you love roses, there are rose gardens at Huntington Library & Gardens, as well.