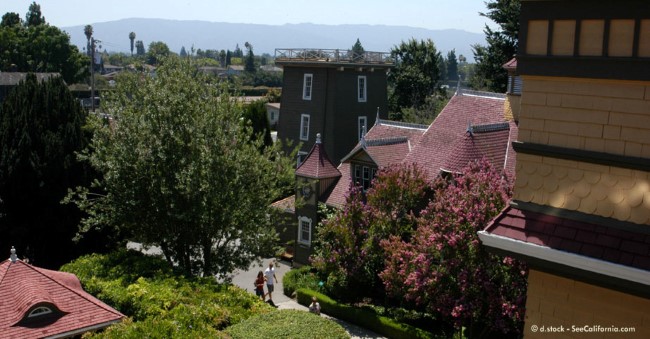 When visiting San Jose, the third largest city by population in California (over 1 million residents) be sure to take in some of the great attractions such as the Giant Monopoly game  and Winchester Mystery House.

The Winchester Mystery House is a tourist attraction that charges a fee for admission to see the inside of an amazing mansion with 160 rooms with oddities such as stairs that lead to the ceiling, doors that go nowhere and that open onto walls, a staircase that descends seven steps and then rises eleven, and chimneys that stop just short of the roof. That's just the start of the things in this place that many say is haunted.

Built throughout the mansion's occupation by Sarah Winchester, wife and heiress of over $20 million in the estate of her late husband, William Winchester (Winchester Rifles,) the superstitious lady asked the spirits to guide her in daily life for 38 years that she resided there after her husband had passed. The Winchester Mystery House is the culmination of the guidance she said she received.

Reports after her death in 1922 were gathered by those who consulted her, constructed here masterpiece of mystery, and attended her séances. The  nightly sessions helped her as she designed the never-ending home project which at one time may have had up to 600 rooms. She sought  protection from bad spirits and would  meet with foreman John Hansen each day to go over new changes and additions.

The creepy part that attracts people to the mansion is the frequent reporting of spirits and hauntings. The air seems rife with energy, so much that the facility keeps an online reporting system of the odd and seemingly unexplainable experiences of tour guests.

The unbelievable Victorian has so much to see that your tour is jam-packed with unusual, odd, beautiful and unexplainable items and construction that goes on and on--often to nowhere at all!

Miles of twisting hallways contain secret passageways in the walls, and with 13 being a powerful number in Sarah's life, you'll notice 13 pains in stained glass windows, 13 holes in a custom made drain cover, etc.

The house built by the spirits doesn't always offer up simple explanations as to why a column is installed upside down or why a door goes into a wall with nothing to open. Friends and acquaintances said that the lady with lots of money and time tried to confuse evil spirits by making mistakes.

It's not all about being odd, however, in Winchester Mystery House. There are world class appointments and furnishings that alone will entertain you.

Rare precious woods-- mahogany and rosewood were utilized. One craftsman worked for 38 years doing nothing but building, installing, and tearing up the floors made of priceless materials such as these rare, expensive woods, and teak, maple, oak and white ash, all arranged in impressive mosaics.

Sarah Winchester  designed the special daisy and spider-web patterns that are embedded in many of the window that are lovely to look at, but don't be deceived. The daisy was her favorite flower and the spider-web most likely had occult meaning for her.

47  fireplaces, 17 chimneys, a Grand Ballroom built almost entirely without nails, 3 mirrors (spirits hate mirrors so Sarah kept them to a minimum,) turrets, towers, curved walls, cupolas, cornices, and balconies, all outlined with finely detailed wood moldings, are some of the things you see during a tour.