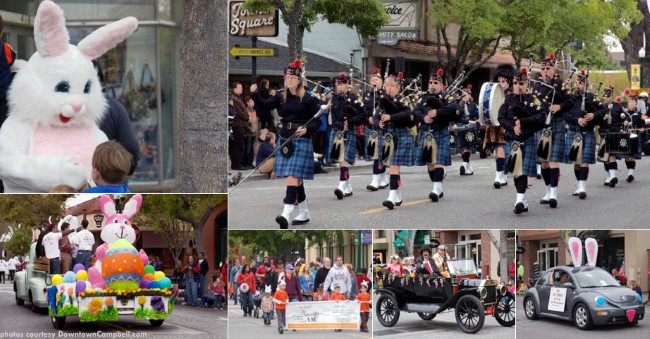 Among the reasons that visitor might make their way to Campbell are its annual events such as the (Easter) Bunny Parade, its popular parks (about a dozen or so) and summer concerts in the park, held annually at The Orchard City Green located in front of the historic Ainsley House.

Campbell's simple roots and history include a man named Campbell--Benjamin Campbell--who arrived in 1846 and formed a business near Saratoga. His sawmill was launched just before gold was discovered not far away near Sacramento, and the time couldn't have been better for Benjamin. He also acquired land and began planting crops, mostly grains and hay. His modest 160 acres he purchased in In 1851 would one day become downtown "Campbell".

Located in Santa Clara County, Campbell was incorporated in 1952, though its roots span over 150 years. There are under 50,000 people living in the city and the affluence reflects similar areas such as San Jose where household incomes are close to $100,000.

For tourists visiting the area, be sure to see the Ainsley House, a 1932 Tudor style home that once was the residence of the town's well to do family known as the Ainsleys.

Shopping is a highlight in a city that is recognized for its unique variety of boutiques, restaurants and mom & pop shops. Local businesses provide the unique and eclectic flavor recognized around the Bay Area.

Farmer's Market offers added incentive to shop in Campbell. It is held on : Sundays from 9 a.m. to 1 p.m. throughout the year. Campbell Farmers' Market can be found on Central Ave.

While visiting Campbell may not be on your 10 list of things to do near San Francisco, you'll be pleasantly surprised by all it has to offer.