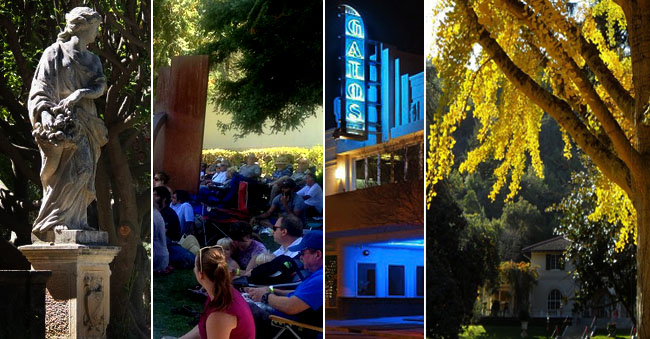 The beautiful little town nestled near the slopes of the Santa Cruz Mountains, near San Jose, has always been known for its beauty and quaintness long before it was incorporated in 1887. Originally part of a rancho dating to 1840, Los Gatos was called La Rinconada de Los Gatos (Cat's Corner) because pioneers to the area often heard the screams of cougars and mountain lions at night.

One who particularly enjoyed the beauty and sounds of the night was noted author John Steinbeck, who reportedly worked on his novels Of Mice and Men” and The Grapes of Wrath,” while living in a secluded spot. San Jose's legendary printer, the late Leonard McKay, once told me about his interview with Steinbeck.

McKay's high school teacher asked students to write a story on someone interesting. McKay said he knew where Steinbeck lived and walked to his rustic home, where he was greeted by the author's barking dog. Steinbeck came to the door to see about the ruckus and McKay said he wanted to interview him for a school paper.

Steinbeck invited him in. The student did his interview and wrote a fascinating story about the man behind the books. Unfortunately, the teacher—for some reason—hated Steinbeck, gave McKay a poor grade and tore up the paper! Too bad. Wouldn't that be a fascinating story to read? McKay said his paper was a dandy but could not recall the details.

Another famous local resident was pioneer Sport's Psychologist and author, Dr. Bruce Ogilvie, who lived near the stone cat pillars so-much enjoyed by drivers on Highway 17. Ogilvie became a psychologist for the Olympics, San Francisco 49ers, Los Angeles Lakers and New York Mets. When I was a freshman basketball player at San Jose State, I had the pleasure of being interviewed by the psychology professor at his beautiful home, as were fellow members of the team, including Darnell Hillman, who would become the NBA's first slam dunk champion.

Another fond Los Gatos memory—I played tennis on the championship Los Gatos Swim and Racquet Club team and had the honor of meeting Hazel Hotchkiss Wightman in Los Gatos. She was an international tennis champ, having won at Wimbledon, at the U.S. Open and many other places. The Wightman Cup, an annual event between women teams from the U.S. and England, was named in her honor.

Today, the town of Los Gatos has more than 30,400 residents and thousands of visitors, who love its locale, its restaurants; its special events and its friendly people. Check out Los Gatos (the cats) for yourself, you'll be glad you did. It's one cool cat!