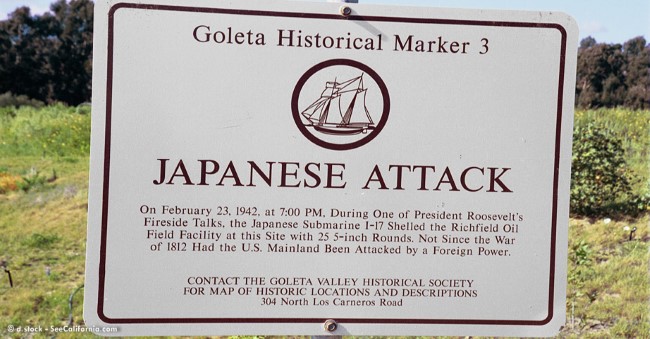 A sign  posted on the beach next to Bacara Resort in Santa Barbara tells about the first attack on United States soil during WWII. In the first attack upon United States soil since this war began, an enemy submarine rose out of the sea off the rich oil fields at Elwood, 12 miles north of Santa Barbara, shortly after 7 p.m. It pumped 16 shells into tidewater fields, but caused only superficial damage.

A single oil well derrick was reported by eye-witnesses to have been hit, but there were no casualties in human life.

Choosing the dramatic instant of the halfway mark in President Roosevelt's fireside chat, the commander of the presumably Japanese submarine opened fire from his deck guns at 7:15 p.m.

Three shells dug up the sand off the Bankline Oil Co. refinery, another was said to have struck a derrick. There was no fire. The other salvos fell short of their marks, it was asserted, and fell into the sea.

Four Japanese and one Italian were taken into custody by Ventura County Sherriff's authorities shortly after the attack. Two Japs were said to have been riding armed with guns. For more than two hours after the raid brilliant yellow flares burst over darkened Ventura. Authorities said it was clearly an effort to signal the enemy.

When last reported, about 8:30 p.m. by a minister at Montecito, the submarine was slipping out of the Santa Barbara Channel in the direction of Los Angeles. The clergyman, Reverend Arthur Basham of Pomona, who was visiting there said he observed the "pigboat" flashing signal lights, apparently to someone on shore.

The Ventura County Sherriff's office received reports that flares had been sighted lighting the skies at several points along the coast in Ventura County near Hueneme.

At 7:58 p.m. upon orders of the Fourth Interceptor Command all radio stations in Southern California abruptly left the air. A few minutes later the coastline was completely blacked out from Carpinteria to Goleta. The blackout area covered a distance of about 25 miles. The yellow alert flashed simultaneously in police headquarters in Los Angeles.

Air-raid sirens screamed in Santa Barbara and within a few moments the entire city was dark.

First report of the submarine reached the Sherriff's office from Mrs. George Heaney of San Marcos Pass, northwest of Santa Barbara. She informed authorities that she heard the first gun report shortly after 7 p.m. With field glasses she said she sighted the submarine. It was lying about a mile off shore.

The next report came from Bob Miller of the Bankline Oil Co., who gave a similar report. By this time, the guns of the submarine were speaking repeatedly and shells shrieking overhead.

Lawrence Wheeler, proprietor of Wheeler's Inn, 11 miles north of Santa Barbara, in the heart of Elwood fields, declared that the first shell "Shook our building." He rushed out of the house and saw a shell explode against the cliff about three-quarters of a mile from his place.

"Another shell whined over my head and landed in the canyon on the Staniff place which is across the road from us."