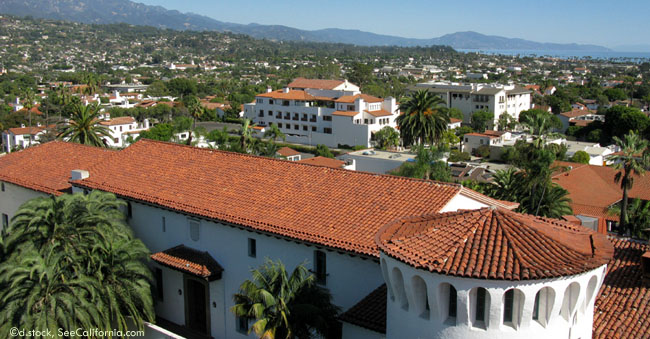 (and they even have a French Festival!)

Some compare Santa Barbara to the Riviera, while others say it's like no other place on earth. That's absolutely true. Santa Barbara is a destination and region unto itself, and if Oprah and host of celebrities don't have some inside fix on this beach locale, then why have they built multi-million dollar mansions along Santa Barbara's coast and rambling ranch land?

Santa Barbara has lots going for it but here are the elements that come together to make it so desirable: Beaches, mountains, wineries, history, a university, and an arts school. Throughout the various institutions and environments, there's an overlay and theme -- conservation. Places such as Art From Scrap (AFS) have become institutions leading the way to improving the ecology. Be sure to visit the Reuse store if you are seeking materials for projects, or want to see the art gallery featuring recycled materials.

Santa Barbara's heritage is ever present and visible in places such as the Queen of the Missions. The dual bell towers on the Santa Barbara Mission can be seen in the distance from vantage points at the top of the Santa Barbara County Courthouse. While visiting the courthouse downtown, be sure to take the history stroll along the cobbled brick walkways that weave a story of the city's Spanish past.

Known for its red Spanish tile roofs, Santa Barbara looks like a picture book place. Most the history tour winds in and out of shops and buildings along State Street, the main street filled with shopping and dining stretching over a mile to the beach and Stearns Wharf.

Another historical distinction occurred at a Santa Barbara beach next to Bacara Resort and is marked by a spot where the only attack on U.S. soil since the War of 1812 occurred in a shelling by a Japanese submarine during WWII.

If you are fortunate enough to afford the price of a room or suite at Bacara Resort & Spa, it is a real treat, as is the cuisine served in the hotel's several restaurants. Miro is the upscale option named for the famous artist, while The Bistro, and the Spa Cafe are more relaxed option. They are but several of Santa Barbara's culinary experiences that compliment the regions amazing wines produced just outside of the city. Be sure to take the wine country tour!

Down at the ocean is the wharf experience, beaches lined with towering, stately palm trees, a beautiful skate park, carousel ride, volleyball courts on the beach, a public swimming facility and playground at the beach, and a harbor with tour boats for whale watching, fishing trips, visits to Channel Islands National Marine Park's islands, and other fun activities such as kayaking.

When you visit Santa Barbara, each trip only scratches the surface of the countless things to see & do in Santa Barbara.