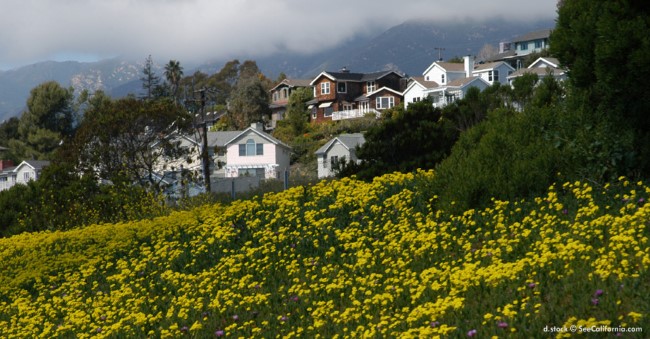 On flowered hills, nestled on and below Ortega Ridge, Summerland enjoys stunning views of the Pacific Ocean. This Santa Barbara County community enjoys the best of the Central Coast, and is located only a few miles south wealthy Montecito, and the City of Santa Barbara. It was known by tourists for decades as the place with the Big Yellow House restaurant.

A dog-friendly public beach you can stop and enjoy, restaurants, gift shopping, and browsing opportunities if you are a fan of antiques, all are reasons you may decide to pull off Interstate Highway 101 to explore Summerland. Several small boutique hotels accommodate travelers who want to stay overnight.

Among the hidden gems of Summerland are an art sculpture on a rock depicting the history of Summerland, and a mural painted on a wall also showcasing the history of the region. In its early formation, the town attracted those interested in the supernatural. Rancher Harry L. Williams, who owned Ortega Rancho, founded the the town in 1889 and invited like-minded individuals to set up residence nearby. Many original buildings in Summerland have ghosts according to some residents and the Big Yellow House, built by the town founder, has two books that surround its resident ghosts, including Hector. Author Rod Lathim worked in the wine cellar as a high school student and first feared others would think he was crazy if he mentioned his experiences in the Big Yellow House. But when he met a descendent of the town founder, she began describing the ghost to a tee, and the needed confirmation eventually led to Lathim authoring a book on the house & ghost, "The Spirit of the Big Yellow House", now in its second edition.

The sea-view town overlooking the Pacific Coast was picture perfect--till an oil boom happened around 1896, turning the views into complete eyesores of metal, monsters belching smoke, gas and other by-products associated with oil drilling. Derricks ruined the town's appearance and only after the oil played out did Miramar Beach regain its scenic beauty decades later. Today you can gaze out to the glistening Pacific Ocean and see the offshore platforms that still continue to pump oil back to land for refinement and use in cars, electricity and other applications requiring a fueling source.

Summerland's main commerce is tourism today. Its shops, restaurants, coffee houses, stores and few hotels are the economic engine for the little town and its people, including some who commute to jobs in Carpinteria and Santa Barbara.