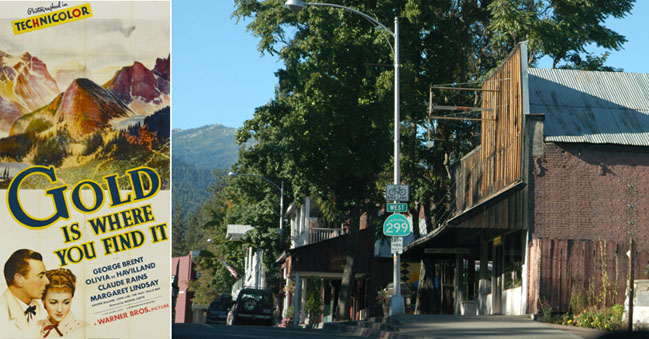 Highway 299 in Weaverville weaves through forests into the downtown, heart of this historic town.

Olivia de Havilland, Claude Rains, George Brent, Gabby Hayes and other celebrities gathered with Weaverville townspeople to celebrate the Warner Brothers' movie, "Gold is Where You Find it," one of the first filmed in Technicolor.

The whole Northern California town was abuzz. There were even bonfires on Main Street. At 8:30pm sharp, a live NBC Radio Network broadcast began in front of Memorial Hall with the Trinity Brass Band playing, followed by interviews of area miners, pioneers and stars. Inside the hall, the movie was then shown before 500 ecstatic fans. It was about the California Gold Rush, hydraulic mining and the feud between miners and farmers in Sacramento Valley. George Brent played a mining engineer, who fell in love with Olivia de Havilland, the farmer's daughter.

Much of it was filmed in Trinity County's Junction City and La Grange. The viewers were thrilled to see their area, especially the Bergin Mine.

Afterwards, the party continued as furniture was removed and a country dance further livened up the evening as stars and locals kicked up their heels. More than 600 people saw the movie the following day.

The next weekend, "Gold is Where You find It" began its successful run in New York. Director Michael Curtiz received such acclaim that it helped him get his next film that year, "The Adventures of Robin Hood."

The movie will never be forgotten in Weaverville, where the Trinity County Historical Society has photos and information on the incredible film and its premiere in one of the most picturesque mining towns around. Visit beautiful Weaverville today. It's a place you will always remember!