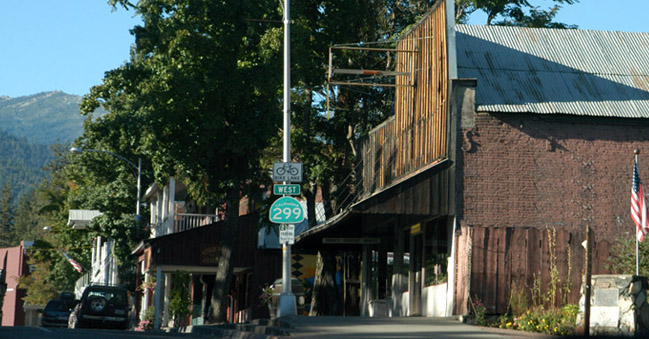 Highway 299 in Weaverville weaves through forests into the downtown, heart of this historic town.

WEAVERVILLE, CALIF.--For such a small place (population around 4,000) Weaverville holds many distinctions in California's history. One of 30 California Preserve America designated places, it was founded in 1850. Like so many cities and towns populated during California's gold rush, Weaverville, indeed, has its own California Gold Rush history and lore. It's residents were mostly Chinese gold miners who built a temple for worship. See the historic Joss House, a Taoist temple, is the oldest continuously used Chinese temple in California.

As you drive into Weaverville along the tree-lined street with neat, brick or wood buildings, the Trinity Alps mountains are visible in the distance. The City is located at 2,000 foot elevation with Shasta Trinity National Forest (and Wilderness Area) surrounding the northern California. city. Since it is 100 miles t0 the California coast, accessible via Highway 299, the weather can be warm and dry in the summer months and cool (coat weather) in the winter. Average rainfall is around 37 inches per year and not much snow.

One of Weaverville's claims to fame is the filming and movie premier that took place there. In 1938 Hollywood stars Olivia de Havilland, Claude Rains, George Brent and Gabby Hayes were among esteemed guests who gathered in town to celebrate the release of Warner Brothers' movie, "Gold is Where You Find it," one of the first filmed in Technicolor.

Today there's a small tourist influx and on our last visit Weaverville Hotel (weavervillehotel.com), an artfully restored B&B dating to 1861 and listed on the National Register of Historic Places, seemed like a nice place to stay in the heart of the small downtown attractions.