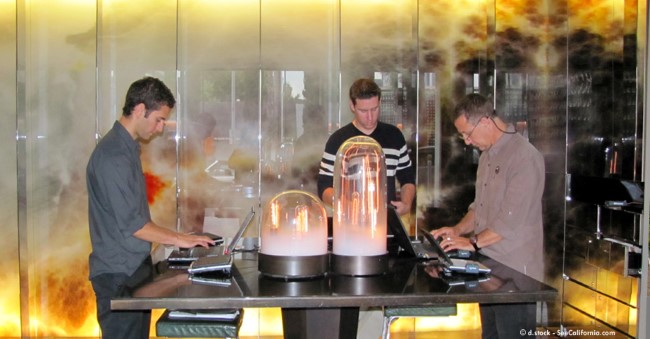 For those who remember the Hyatt Hotel in West Hollywood, you are not far away from the legends who have stayed there. Once the darling of the wild rock to punk band legends, the hotel was known for its late night parties. Located across the street from House of Blues and just a quick walk down to the street from the other legendary hot spots filled with music, laughter and entertainment, the hotel's location has been a natural for attending concerts, parties and special events around town.

When the Hyatt had a remake and re-opened in 2009 as the hotel chain's more upscale brand, Andaz, not only did rock lore mildly get a boot, but so did the hotel rates for a place that had become "cheap". Charging over $100 more with its remake, the rooms begin around $250/night seasonally and the hotel seems to have found a successful formula that fulfilled investor needs. The architectural design firm of Janson Goldstein sought new statements without completely removing the rock lore.

A signature look--wood, steel, glass and stone. A sophisticated palette of carefully considered materials to swathe the Hyatt on Sunset was chosen during complete hotel renovation. Double-smoked and white oiled European oak grounds a lobby space appointed with distinctive furniture. The ground floor restaurant features custom-designed, tumbled mosaic flooring, custom-designed poured slump glass, and screens of decorative steel cable and steel and woven leather. Guest rooms and baths incorporate laminated, mirrored-glass panels with a custom midnight interlayer; other decorative highlights for the guest rooms include mosaic tiles of carrara marble in the bath, carpets flecked with metallic fibers, and custom bed throws and accent pillows. Custom carpet with a fade-in/fade-out pattern lines the corridors.  A site-specific hand-painted metal disk 11-foot sculpture by artist Jacob Hashimoto is but one of the "touches" you'll notice.

When you walk in the lobby you might see people (shown in photo) on keyboard checking their correspondence with the complimentary wi-fi throughout the premises, and you begin to look around for check-in which isn't apparent. If you are just visiting for a meal, to meet a friend, or attend a party, be sure to wander and see the art gallery and decor. It's very trendy, sleek, and comfortably chic.

The Andaz West Hollywood has 257 room and suites, some permit smoking --with filtrations so smokers don't have to smell the smoke, and maybe that's why there are also Respire by Hyatt – Hypo-Allergenic Rooms. It doesn't appear that there is a guarantee that you won't smell smoke, but the room describes the many measures in a six-step process to purify the air and reduce allergens that exist everywhere.

When the hotel opened in 1963 (the exterior continues to look quite ordinary) it was a Gene Autry Hotel, then a Hyatt beginning around '66. It took on the name Hyatt on Sunset later, and then Hyatt West Hollywood.

Among its legends: Led Zeppelin, The Who, Rolling Stones, Little Richard who stuck around for nearly a decade, Keith Richards of Rolling Stones who threw a TV out a window and Jim Morrison who was evicted by management for hanging out a window by his fingertips, as he dangled over the pavement. On the roof of the 14-story hotel the end-of-tour party scene in the film This is Spinal Tap was filmed. Tourists flock to West Hollywood to Walk on the Wild Side, and such memories are buried in a time capsule known as West Hollywood Hyatt. Once The Riot House of rock and roll antics, such memories are fodder for Starline Tours guides who drive by with vans of tourists.

Laugh Factory, Whiskey a Go-Go, The Roxy or House of Blues all are within reach of the Andaz. When you go, look for billboards--West Hollywood has a long history of billboards. You'll often find the side of the Andaz West Hollywood building advertising a movie or tv program.

For quieter accommodations, wander a few blocks off Sunset Boulevard