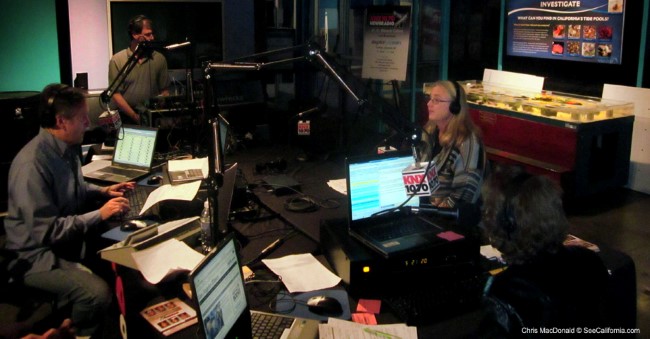 "On Your Corner" Brings KNX Live Broadcasts To Your Neighborhood

Newport Beach, CA--If you ever wanted to work on radio or if you're one of the more than 1.3 million listeners who consider KNX 1070 NEWSRADIO part of your family, you need to pop in and get acquainted with their amazing on air team when they broadcast their popular "On Your Corner" in a Southern California community near you.

We recently happened to see two consummate pros--Diane Thompson and Chris Sedens--broadcasting from ExplorOcean, home of the Newport Harbor Nautical Museum in the Fun Zone. The exciting event, which featured stories and interviews about Orange County's coastal communities, was the 16th "On Your Corner" that the award-winning all news station has produced, with more to come.

Watching Diane and Chris perform their magic as they read news, introduce live and taped segments and read lead-ins to advertisements was a joyful, inspiring experience. You'll be awed by seeing their split-second timing, hand signals, courtesy cues and button punching, including on the Sounder, a machine that plays very familiar KNX musical jingles for traffic, business reports, station IDs and the like.

The anchor's clear, smooth radio voices, flowing-almost flawless-delivery, multi-tasking skills and incredible focus shows why these veteran broadcasters are two of the top in the business. Their chemistry was fascinating to witness as they made, what to the observer look like complicated work, fun.

There's definitely no dozing off on air in live radio. It's like a three ring circus where you have to be knowledgeable, focused and captivating so listeners will stay tuned. No boring voices allowed. Many listeners develop a real bond with KNX's anchors and reporters that they hear daily.

Seeing them in action, it's no wonder that former Texan, Diane, and former Canadian, Chris, are top notch. It's not only their smooth professionalism but they are both as likeable as can be. Chris even asked me to pull up a chair so he could show how the magic is done.

There were even live interviews with Newport Beach Mayor Keith Curry and Huntington Beach Mayor Connie Boardman. Connie answered on air questions from Chris and Diane on how the city successfully cut spending, got major new businesses to move there, the excitement over a large new apartment development, the anticipation of Pacific City (residential/commercial project) finally moving forward and the US Open of Surfing.

It's great to have KNX "On the Corner" visit communities in the Southland. It gives both the businesses, listeners and broadcasters a boost. "It was a delight to have KNX here and we enjoyed three weeks of publicity leading up to the event," said Rita Redaelli Stenlund, President of ExplorOcean. "People learn about our museum and the incredible plans we have for the future." For KNX, it gets the on air anchors and crew out of the studio, meeting with their listeners and advertisers, and it creates new advertising revenue and new listeners.

But for many of us, the best part of it all is getting to meet "the voices" we listen to daily like Diane, Chris, Jim Thornton, Dick Helton, Vicky Moore and Frank Mottek as well as the nice crew behind the scene. The more high tech the World gets, the more we need the human touch--the up-close, in-person relationship that is often missing today. My plaudits to Andy Ludlum, KNX Director of News Programming, who conceived the idea, Joe Guimond, Executive-Producer of "On Your Corner," and the rest of the team for bringing radio "to life."