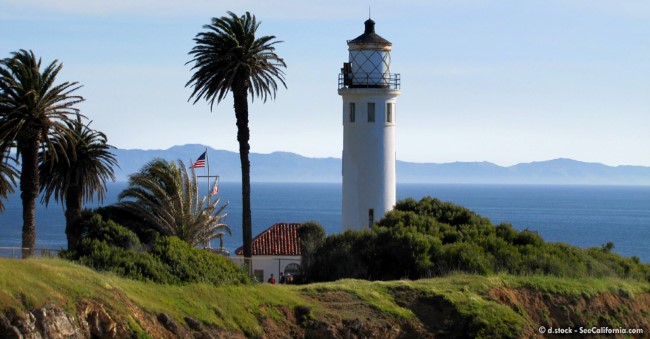 Rancho Palos Verdes, Calif.-Point Vicente Lighthouse sits on what looks like the edge of a coastal plateau above the rocky beach of Rancho PV. It is one of the prettiest lighthouses to grace the Southern California coastline and though the gates to access it are sometimes locked, great views and photos are afforded from the Point Vicente Interpretive Center next door. The grounds and a small museum are normally open (subject to change) the second Saturday of month between 10 a.m. and 3 p.m. except for the month of April when it is opened 10 a.m. - 4 p.m. on the first Saturday in conjunction with the City of Rancho Palos Verdes's Whale of a Day Festival. Admission is free. Pets are not allowed on the Coast Guard grounds. For recorded information, please call (310) 541-0334.

Although there are only a few light stations in the populated region of more than 10 million inhabitants, this lighthouse shares stunning hilltop views with the homes and parks of Los Angeles County's Palos Verdes neighborhoods or Rancho Palos Verdes and Rolling Hills Estates. On a clear day, migrating whales can be seen traveling north or south, a view enjoyed also by residents of homes situated on the brown cliffs of this south L.A. county region.

Point Vicente lighthouse is located 10 miles north of San Pedro's Point Fermin lighthouse. It features a third order fresnel lens mounted in a reinforced concrete tower that stands 55 feet (or 67 feet according to another source) tall and 185' above the water. The lens, hand ground by Paris craftsmen in 1886, was used in Alaska before its installation in California. In 1934 the radio station and the radio navigation beacon were added.

The point was originally named in 1790 by Captain George Vancouver. Vancouver explored the Pacific coast for England in his 90 foot sloop Discovery. He named the point for his good friend Friar Vicente of the Mission Buenaventura.

The Lighthouse was manned till 1971. During WWII Palos Verdes Peninsula and San Pedro's Fort MacArthur were on alert for enemy attack. During that time a 25 watt bulb faintly lit the tower.

Resident ghost: Lady Of The Light, a tall woman in a flowing gown slowly paces the tower walkway, according to many reports. Could she be the ghost of a wife of the first lighthouse keeper? That poor lady stumbled from the edge of a cliff one foggy night.

When you go: A former radio center is manned by young volunteer civilian members of the Coast Guard Auxiliary. You can recognize them by their outfits they wear, and their enthusiastic involvement.

Open to the Public? YES