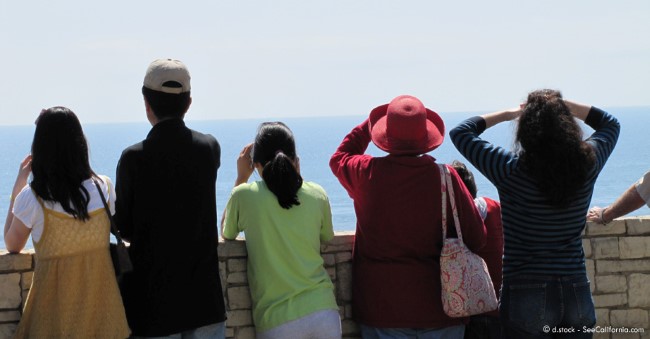 The park grounds are open daily to the public from dawn to dusk, and the building is open 10 a.m. to 5 pm. except holidays (subject to change).

Another facility nearby you might also want to stop by and visit is White Point Nature Preserve.

Point Vicente Interpretive Center is a building facility operated by the City of Rancho Palos Verdes that is open to public free of charge. It contains exhibits about the history of the region, a film in a small theater, and artifacts from what was once the largest marine attraction in the world, Marineland. The grounds of the facility overlook the tall Point Vicente Lighthouse.

Pont Vicente Interpretive Center unifies the history of the region beginning with the Tongva Indians through the early founders of today's Palos Verdes peninsula. The area provides one of the best locations on the coast for watching whale migrations.

Marineland brought attention to the oceanic environment when it opened in 1954, and with its closure after acquisition by SeaWorld in 1987 a void existed, though the peninsula and San Pedro are recognized as having some of the best nonprofit organizations dedicated to conservation of the ocean environment and education and study of whales.

While the Marineland space now exists as Terranea Resort, the Point Vicente Interpretive Center was renovated from a previous rendition and in July 2006 after an extensive remodel took in some of the exhibit items that were displaced when the resort construction began.

The Interpretive Center originally opened in 1984 with a mission to present and interpret the unique features and history of the Palos Verdes Peninsula. Now showcasing 10, 000 square feet of space, there is special emphasis on the Pacific gray whale. This premier whale watch site provides spectacular opportunities to view the annual migration of the Pacific gray whale, from December through April.

Docents lead tours inside the Center, which is also available for weddings and special events rental. Outside the lush green lawns offer shade trees, picnic tables, and great vistas for relaxation and enjoyment. When visiting Huntington Beach or if living there, be sure to drop by the Interpretive Center.