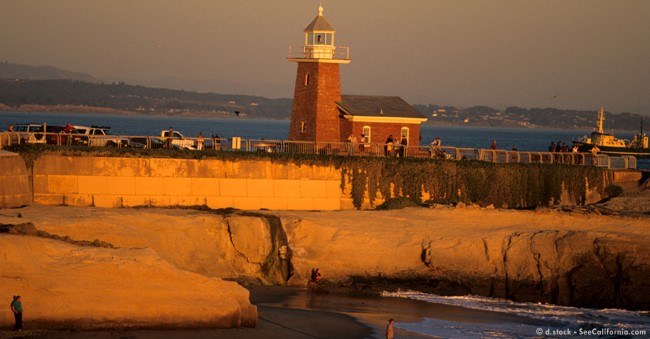 Santa Cruz has not one, but two lighthouses. The best known of the two is the Mark Abbott Memorial Lighthouse, established by parents who sought to commemorate the life of their surfing son who passed away in an accident. 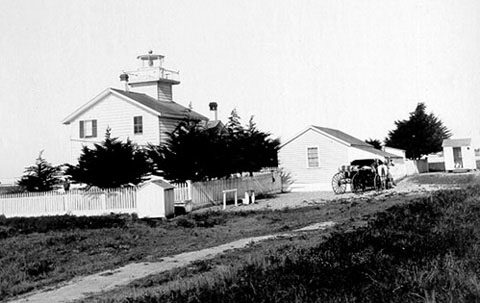 It is not the first lighthouse to grace the shores of Santa Cruz, however. The first lighthouse opened in 1869 and included a Fifth Order Fresnel lens. the Keepers House was a 1.5 story house using a design from a Washington lighthouse, the Ediz Hook. The pitched roof was surmounted by a square light tower in the wooden structure that rested on a brick foundation.

An octagonal lantern room was shipped from a lighthouse depot in New York, and a Fifth Order Fresnel lens and a lard-oil lamp were installed and lit in 1870. Called Santa Cruz Lighthouse, it was the 12th facility to enter service in California. In 1879 the Santa Cruz Lighthouse was jacked up on its foundation and moved approx. 300 feet north by a team of horses, as experts predicted the land beneath the original building was susceptible to collapse on Point Santa Cruz.

In 1913, a Fourth Order lens replaced the previous, weaker lens. An eclipser was installed inside the stationary lens to produce a blinking pattern. Powered by a 130-pound weight suspended below the lantern, a pair of vertical screens revolved around the lamp, producing 3.5 seconds of light, followed by 1.5 seconds of darkness.

Santa Cruz Lighthouse was deactivated in 1941, replaced by a small, 26 foot lighthouse structure of wood 200 feet seaward of the first lighthouse. In 1948 the U.S. Coast Guard put the lighthouse on the auction block, stipulating that the purchaser move it from the location. The buyer dismantled the structure and used it as wood for projects.

In 1965 an 18 year old local surfer drowned near Pleasure Point, and his parents donated around $20,000 from the life insurance policy pay-out to the city of Santa Cruz to construct Mark Abbott Memorial Lighthouse. Housed within the lighthouse is the Santa Cruz Surfing Museum.